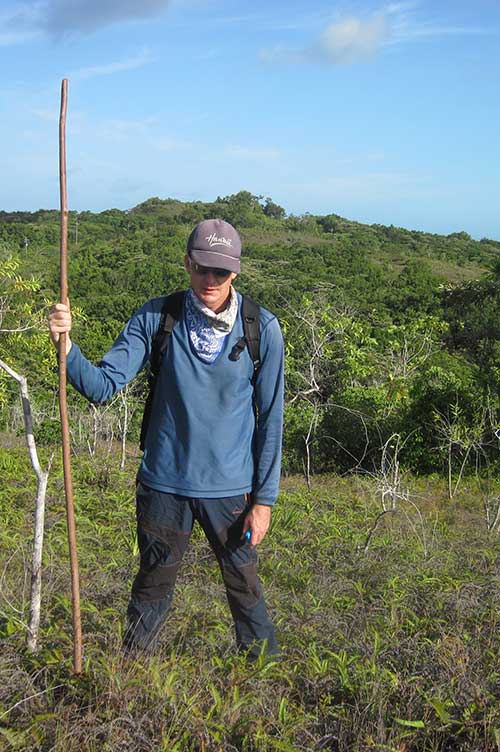 Julian received his Bsc in Biology from University of New Mexico in 2001, after dragging himself back from his first visit to the tropics – a semester abroad program in Costa Rica that turned into a 1.5 year stay during which he worked as volunteer naturalist guide and studied forest regeneration from cattle pasture.  He entered the Peace Corps with the hope of working in tropical forest conservation, and spent a year in an indigenous forest village in Panama before being transported (long story) to Palau in 2003, where he worked at The Nature Conservancy as an agency liason for two years. One of the many projects he volunteered to help support during that time included monitoring at Jellyfish Lake with Coral Reef Research Foundation.  This led to a year working as their collection manager, which included fascinating side projects helping research in the marine lakes and coves and assisting with bathymetric mapping of the Southern Lagoon and Northern Reefs.  After a two year hiatus doing native landscaping in New Mexico and teaching English in South Korea, he returned to the tropics and received his Msc in Tropical Conservation Biology and Environmental Science from the University of Hawaii at Hilo.  His thesis was based on native forest restoration in the Lake Ngardok Nature Reserve, and this led to several ongoing research projects supported by the Institute of Pacific Islands Forestry, Hilo.

Beginning in 2011, working with CRRF and in collaboration with Palau Forestry, these projects included a long term study of vegetation change on Babeldaob Island using remote sensing, and the incidence of wildfire on Babeldaob since 2012 using GPS, aerial photography, and GIS. In 2014 a permanent forest dynamics plot was initiated in the Ngardok Nature Reserve, which will be a member of the Smithsonian Global Earth Observatory network.  In late 2015 Julian moved to the island of Guam to expand the study of wildfire in Western Micronesia, and since early 2016 has been using online satellite imagery to monitor and map wildfires on Babeldaob, Guam and Yap islands.