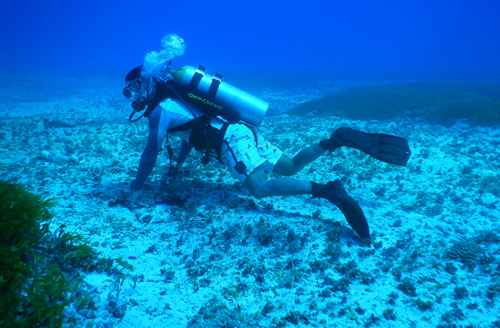 Growing up in Manchester in the North West of England there were not many coral reefs for Alex to explore. Luckily when he was nine his family moved to Malaysia where he eventually learned to scuba dive on a school trip, and from that moment he was hooked on the underwater world. In a small twist of fate Alex’s first work experience before he started university in 2003 was assisting with NCI collections in Borneo with Dr. Nicolas Pilcher, one of CRRF’s subcontractors. After graduating from the University of Hull with a Bsc (Hons) in Marine and Freshwater Biology, Alex worked as an aquarist in the UK and at the Dubai Aquarium where duties ranged from running the aquaculture facility to hand feeding the many sharks and sting rays in the main 11 million liter aquarium.

From there Alex went on to be involved with various turtle projects, primarily monitoring the impact of oil and gas projects on nesting sea turtles in Western Australia. This also included a stint in returning to his second home in Malaysia to help local NGO’s establish turtle and coral reef monitoring programs on the East coast of peninsular Malaysia. Following three years in Qatar running the marine team for a large environmental consultancy firm, Alex finally returned to the UK and received his MSc in Marine Biology, where his thesis studied the efficacy of MPA’s in the Cayman Islands. After a brief period working as an independent consultant, Alex found his way to Palau and CRRF. Alex’s primary role at CRRF is to conduct bathymetric surveys around Palau using a multibeam echosounder and on most days can be found on the outer reefs on CRRF’s research vessel, ‘Kemedukl’.