CRRF has a network of thermographs around the Palau archipelago and in the Southweast Islands, with an online catalogue of data starting in 1999.

Since 1999 CRRF has characterized the vertical and temporal patterns of water temperatures throughout the main island group of Palau, using a variety of recording temperature instruments called thermographs. The water temperature around Palau on the outer reefs and surrounding ocean ranges from about 28.5° to 30.0°C and have an annual cycle during ‘normal’ years with two highs and two lows.

The yearly low occurs in around February then increases near the end of May or early June. In July the westerly monsoon winds normally start to blow and they act to cool the temperature by one degree or more by mid August, after which, temperatures rise again to a peak by November. Shallow waters within the lagoon areas of Palau are usually about 0.5°C higher than the outer ocean, but follow the same annual pattern. 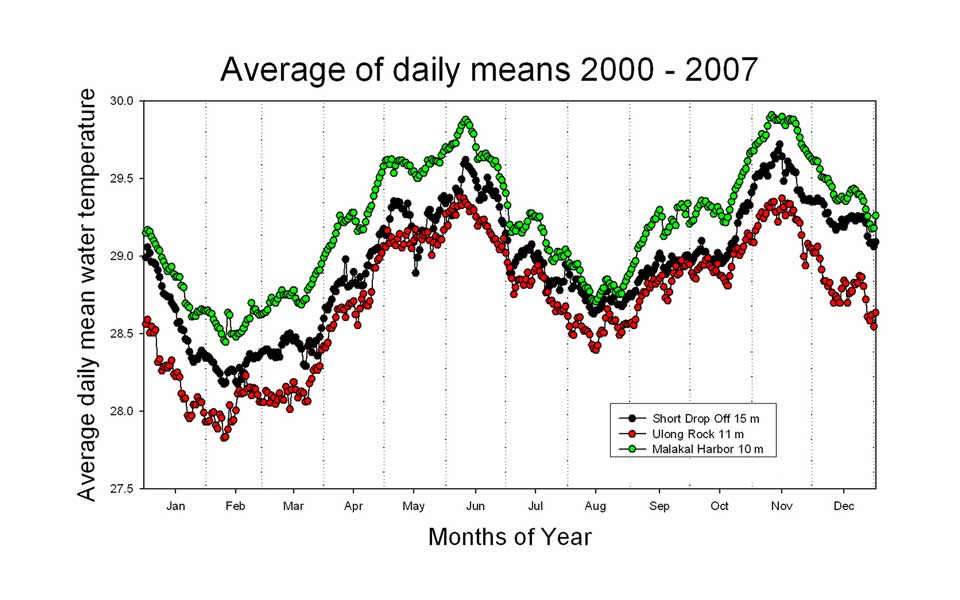 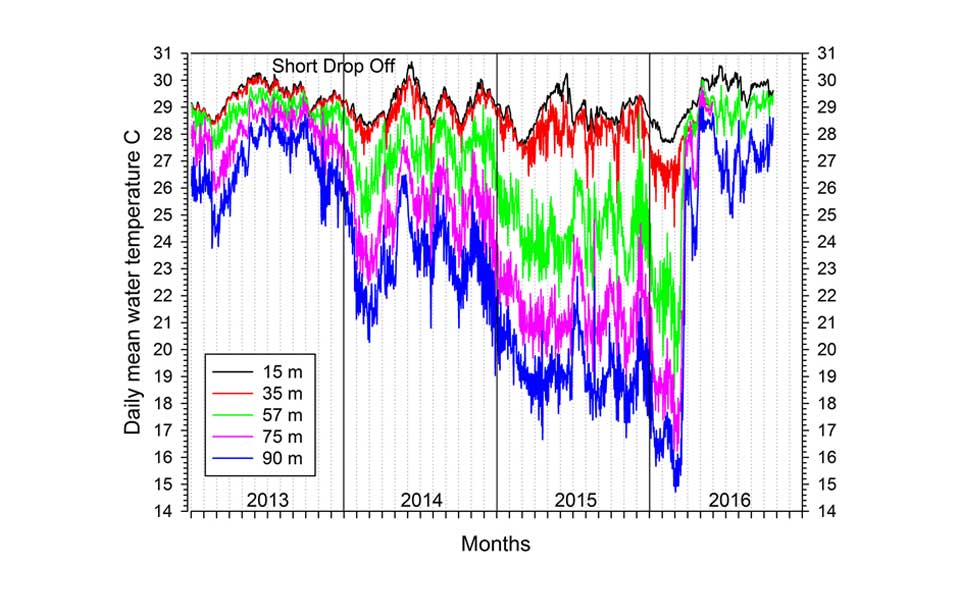 In Palau, like the vast majority of the ocean, the water temperature decreases with increasing depth. Depending on the seasonal ENSO shifts, these changes in temperature may be obvious to divers or subtle within the range of recreational diving (<40 m). When there are abrupt changes in temperature, these are known as thermoclines, which results from layers of consistently warmer water overlying the cooler (more dense) waters. On most outer reefs, the upper 10-30 m of the water column are usually the same temperature with no thermoclines present until deeper depths, a reflection of the forces (waves, wind, currents) that  thoroughly mix the upper water column. At some depth though, the temperature will either gradually cool or there will be a sharp thermocline. If the temperature versus depth is plotted, a typical profile around Palau has a mixed layer extending to about 40 m, then a couple of small thermoclines down to depths of 60-75 m. However, temperatures over the water column are very different during El Niño and La Niña periods. The tropical ocean may be consistently warm on the surface, but is not necessarily “stable” underneath.

The first vertical thermograph array CRRF deployed was at Short Drop Off on the eastern barrier reef in 1999. Upon recovery and download it provided a revelation to us; the outer slope’s mesophotic and deeper reef environments (30 to 90 m depth) proved to have high variation in temperatures over both the short term (minutes to a few hours) and on medium (day to months) time scales.  The short term hourly to daily variation of 4-10°C was common and due to internal waves, internal tides and other phenomena, such as bores. The water temperatures in deeper mesophotic regions (60 – 90 m) often were at or below the 18-20°C level, making such areas thermally stressful for reef corals and probably limiting the maximum depths for coral growth. Additional vertical arrays were soon added at different sites around Palau. Over the next few years it was discovered that while each array had more or less the same pattern of weekly or monthly mean values, the short-term variation at each station differed from the others in timing and extent. 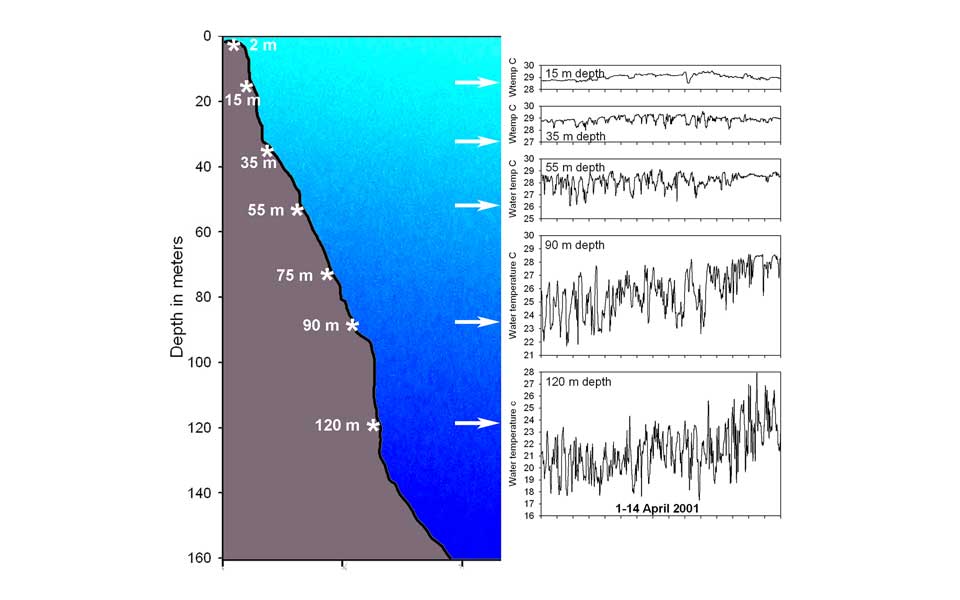 CRRF has a network of 140 instruments at 42 stations throughout the main Palau group and into the southwest islands.

The upper part of the outer reef water column has had relatively stable temperatures over the years. A depth of 10-15 m was chosen for most stations to assess the temperature impacting most of the shallow reefs.  Nearly all stations have at least one thermograph within those depths.  Other vertical arrays have instruments at 35 m, 57 m and 90 m depths at which significant variation in both times scales starts to occur.  At 57 m depth on the outer slope the instantaneous temperatures often dip into the upper teens, getting near the lower thermal limits for reef building corals.  This is associated with very low coral cover at this depth, and may indicate a lower limit to coral reef growth in Palau based on temperature, not light penetration (which is often believed to be the case elsewhere). Click here for more information about Mesophotic Reefs.

Bleaching Events and the Water Column

One major goal of the vertical arrays was to document the water temperature during a coral bleaching event.  Surface waters heat to temperatures in excess of 30°C for a period of days to months, inducing stony corals to lose their symbiotic zooxanthellae algae and “bleach.”  Most documentation of bleaching event temperatures is limited to the upper 20 m, however the temperature structure and the extent of bleaching at greater depths is important, but largely not understood.  In 1998 during the height of the bleaching event in Palau, the water at depths of 90-100 m seemed as warm as surface waters, but no solid data were taken as we did not have any instruments.  It was hypothesized that during a bleaching event, which is associated with a strong La Niña in Palau, the water column to depths of 90 m or more would become essentially unithermal – the same temperature top to bottom.

Such a bleaching event occurred in Palau in 2010, although not as intense as the 1998 bleaching. The water column became nearly unithermal (29.5-30.5°C) from the surface to 90 m depth providing no cool deep refugia from high temperature. This unithermal condition persisted for only a few weeks, with the highest temperatures throughout the water column for only a few days.

But a wide variety of corals (both hard and soft) bleached and many died as a result, with deep corals bleaching just like the shallow water ones.

During periods of El Niño climatic conditions, the water temperatures around Palau are cooler and more stratified with depth. These conditions are beneficial for reef growth in shallow depths as there is increased upwelling of nutrient rich cool water and corals can use such components to enhance growth in the photic zone of high light intensity. However, cold can also be “bad.” When thermoclines are very shallow and cold water intrudes onto the reef building corals, these can also bleach. In Palau this is not a particularly important factor for the shallow ( < 40 m) depths, but in the mesophotic region, the water can get cool enough in a strong El Niño for cold water bleaching to occur.  We noted bleaching of relatively small plate corals at 40-60 m depths during the 2015-early 2016 El Niño peak. However the percent cover of stony corals in most areas of the Palau mesophotic is low and colonies are generally small in size, so it is not as immediately obvious.  We hypothesize this is a major factor limiting the distribution of reef building corals on the deep reefs of Palau.

Measuring Water Temperature: The need to dig below the surface

When considering the actual temperatures impacting the marine environment, it is important to remember that the shallow sea surface, if reasonably calm, during the day can become much warmer than the underlying water just 5-10 cm below.  This “skin” temperature can often be several degrees C higher than the “bulk” water just below it. Unfortunately satellites used for measuring remote sea surface temperature (SST) measurements “see” only the skin layer of the ocean and typically try to get around this problem by taking temperature measurements before dawn. Unless there is vertical mixing of the skin and bulk water below it, that SST value may not be the same as the temperature even 1 m below where reefs occur. It is incumbent on the researcher, whenever possible, to actually measure the water temperature on reefs at various depths with accurate in situ instruments to check for any skin temperature errors from satellite SST data.

The thermal structure of the water column below the surface and its heat content cannot be accurately measured via satellite remote sensing. It is necessary to place instruments at various depths or have some type of profiling instrument (see Ocean Observations). In Palau we place recording thermographs at selected depths along the reef profile by diving, leave them to collect data and then recover later and download.  Such a deployment of thermographs is called a “vertical array”, each unit recording at its given depth on the same sampling schedule (up to once per minute). The disadvantage of such a system is that you have to find and recover the instruments to get any data, but such arrays can be set up relatively cheaply. A publication in the journal of The Oceanography Society by Pat Colin provides a 20 year overview of seawater temperature on the outer reefs of Palau. Thermographs can also be set up on a mooring, distributed along a line with a float at the top and a heavy weight at the bottom. This has disadvantages in that the mooring can break and float away or the float can fail and then the array sinks to the bottom. Currents also bend the mooring downward, so the depth of each thermograph can change often, producing variable data not at a consistent depth. The array placed along the reef is the best way to get solid data over a period of many months to years. Recent work in Palau with Travis Schramek, Scripps Inst. of Oceanography, in Geophysical Research Letters, has shown that mean sea level (MSL) is a good proxy for heat content of the upper ocean where reefs occur. MSL is a value that can be measured either by satellite or via a tide gauge located near the reefs of interest.