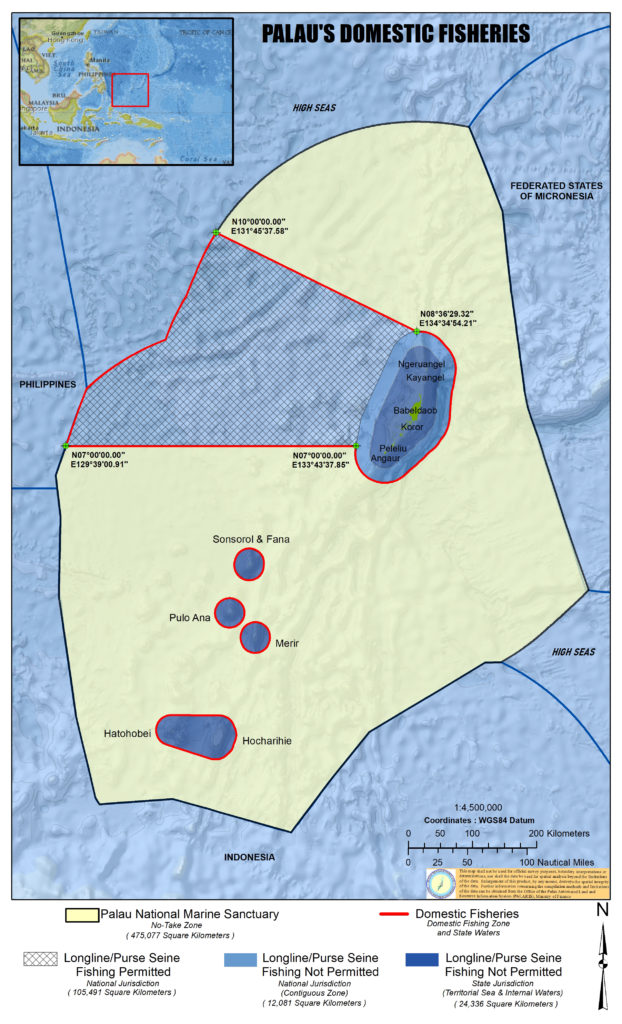 Within the Indo-Pacific, Palau is recognized as a leader in marine conservation. In 2009, former President Toribiong declared Palau’s waters as the world’s first shark sanctuary, but the shark sanctuary was never signed into law. The Shark Haven Act (Senate Bill #8-105), proposed in 2009, was not adopted. A 2003 Palau law (RPPL 6-36) banning the use of wire traces and the retention of sharks, including their fins, by foreign fishing vessels, still had protective effects for sharks, especially those caught by longline gear.

In 2015, the Olbiil Era Kelulau (Palau National Congress) passed the Palau National Marine Sanctuary (PNMS) Act (RPPL 9-49). It established 80% (500,000 km²) of Palau’s EEZ as a no-take reserve and the remaining 20% as a domestic fishing zone (DFZ) where fishing by local, foreign or chartered licensed fishing vessels is allowed (RPPL 9-49 ; amended by RPPL 10-35). The original PNMS Act included a provision that prohibited any person to fish for, remove fins or possess any part of any shark within Palau’s waters. Another law related to reef fish exports (RPPL 9-50) annulled the PNMS Act’s blanket shark protections and reef sharks within Palau’s coastal waters are currently not legally protected from injury, mutilation or taking through fishing or other means. 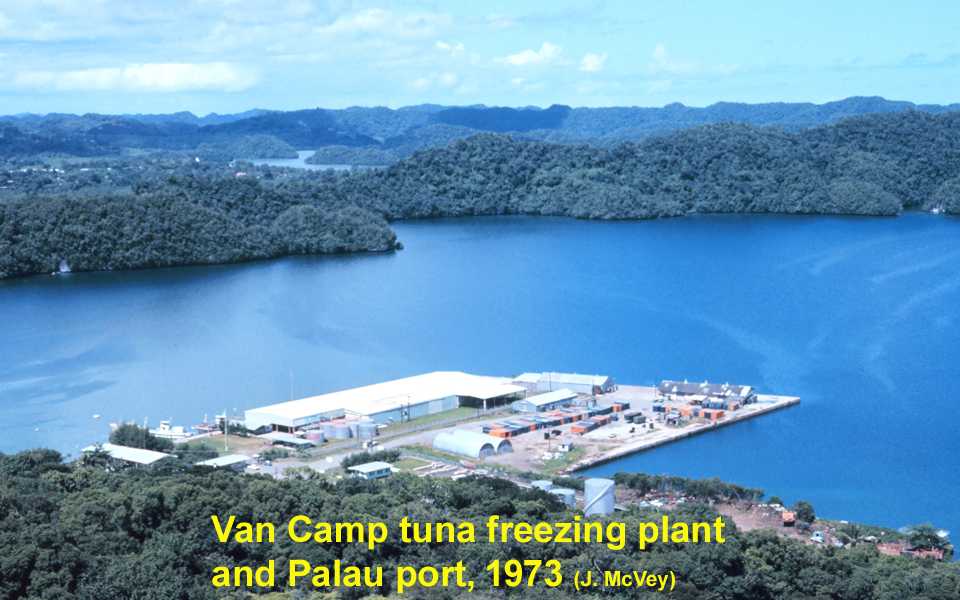 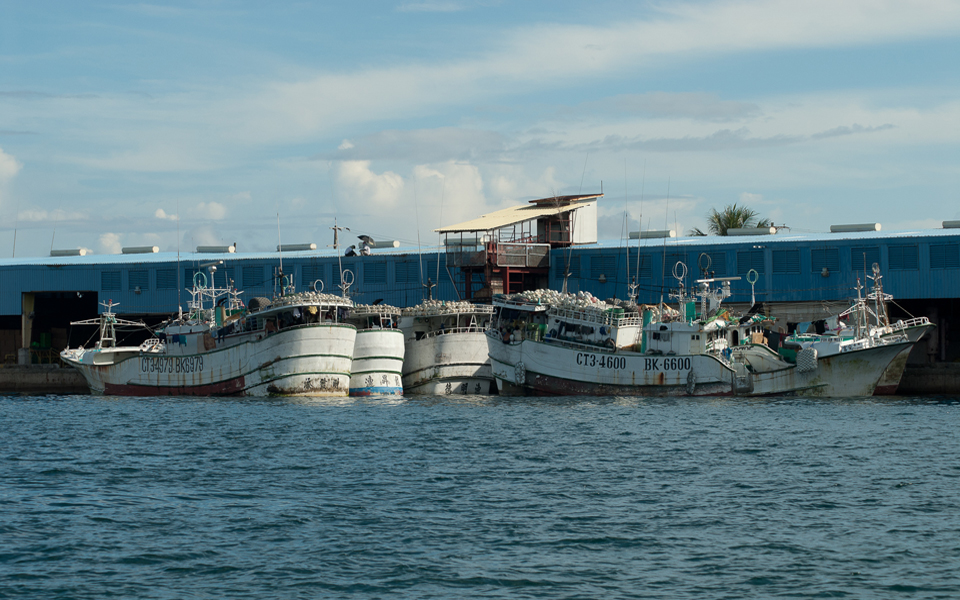 Palau’s offshore waters have rich stocks of far-ranging pelagic species, including tuna, billfishes, sharks and rays, as well as cetaceans (whales and dolphins) and sea turtles. Industrial-scale offshore fishing for tuna was pioneered by the Japanese with pole-and-line fishing for skipjack tuna (Katsuwonus pelamis) during their occupation of Palau (1920s). Production in those early years peaked at 33,000 tons in 1937 for Micronesia, of which 75% was caught in Palau and Chuuk. World War II ended Japanese industrial fishing, however in 1964 the US seafood company Van Camp established a transhipment base in Koror, supporting 20-36 locally based pole-and-line vessels. Also the 1960s saw the advent of Japanese distant-water tuna longline fishing for yellowfin tuna (Thunnus albacares) in Palau’s EEZ. Today the fishery supports around 20 longliners based out of Okinawa.

In the early 1980s, purse-seining replaced the more sustainable, but less cost effective, pole-and-line fishery in much of Micronesia. Palau, due to its location at the Western boundary of the regional fishery and its distance from ports with purse-seine landing facilities, has never been home to a large purse-seine fishery. Pole-and-line fishery in Palau largely ended with the closure of Van Camp in 1982. Since then the majority of tuna catches in Palau’s waters have been made by longliners from Japan and Taiwan, and – until the early 2000s – Korea and the People’s Republic of China (PRC). Palau’s national fleet has largely consisted of vessels chartered from Taiwan, with a small number (1-3) of domestically owned longliners in recent years.

Three longline fishing companies were established in Palau between the late 1980s and mid-1990s which brought in foreign vessels from Taiwan and/or the PRC to supply fish, nearly all of which was exported – either air-freighted to Japan (higher quality product) or shipped to Taiwan (lower quality fish). One of these went under in 2008, while the other two ceased operations in Palau with the implementation of the Palau National Marine Sanctuary in 2020.

Tuna fishing in Palau’s waters is managed at a sub-regional level by the Parties to the Nauru Agreement (PNA; est. 1992) and at a regional level by the Western and Central Pacific Fisheries Commission (WCPFC; est. 2004) for the Western and Central Pacific Ocean (WCPO). Established under the Convention for the Conservation and Management of Highly Migratory Fish Stocks in the WCPO, it assists Pacific countries in the sustainable management of these far-ranging fish stocks both within countries’ EEZs and in the High Seas. The Pacific Community (SPC), as scientific service provider and data manager for the WCPFC, is the custodian of members’ fisheries data.

Palau has played a fundamental role in the establishment and success of the PNA, one of the world’s most innovative and successful fisheries management bodies. In 1995 the first regional management tool for the purse-seine fishery was implemented, which mandated targeting of skipjack tuna and improving economic returns through access fees and developing local fisheries. In 2007 the Vessel Day Scheme was started, a unique management system that has allowed its members to more fully reap the true value of their fisheries. Today, the PNA control the world’s largest sustainable skipjack fishery; the allocation of vessel days contributing to economic benefits for each member country.

Bycatch –the catch of non-target species, whether retained or discarded– is an element of almost every marine capture fishery. Fishing mortality through bycatch is a primary source of population declines observed in several species of marine megafauna, including sharks, rays, cetaceans, seabirds and sea turtles. Although purse-seine tuna fisheries have some elasmobranch bycatch, they generally make up a small percentage of the total purse seine catch. The less selective, and less strictly monitored, longline fisheries tend to have a higher target to bycatch ratio. The WCPFC has introduced several conservation and management measures (CMMs), intended to reduce fisheries impacts on so-called species of special interest, e.g. sea turtles, cetaceans, seabirds, and sharks including whale sharks (Rhincodon typus), silky (Carcharhinus falciformis) and oceanic whitetip sharks (C. longimanus). Tuna longline crews are required to report all catches in logbooks. However, incidental catches, particularly of protected or prohibited species, are often under-reported in logbooks. Observer coverage through the WCPFC’s Regional Observer Program has been lower than the regionally agreed 5% of total fishing effort in Palau for several years. As such, the extent of bycatch in Palau’s tuna longline fisheries is not well understood.

A stated objective of the PNMS Act of 2015 is the recovery and reproduction of the tuna stocks exploited by foreign longline fleets. However, given that the tuna stocks in Palau’s waters are not overexploited, the benefits of protection afforded by the sanctuary may be greater for populations of threatened bycatch species. Measuring their responses to spatial protection will require an understanding of previous levels of incidental capture and resulting fishing mortality. Such data are collected by trained fisheries observers and through vessels’ logbooks, but bycatch monitoring and reporting in Palau has been poor in the last five years. An electronic monitoring (EM) trial was conducted on seven tuna longline vessels from 2016 to 2018 to test the suitability of this technology to collect information essential to effective fishery monitoring.

CRRF Associate Research Biologist Dr. Vanessa Jaiteh is currently finalizing a research project funded by the Swiss National Science Foundation to determine the species composition, catch rates and abundance of bycatch in Palau’s tuna longline fishery. This study draws on two decades of logbook and observer data, as well as data collected during Palau’s EM trial to quantify bycatch in Palau’s longline fishery prior to the implementation of the PNMS, and to predict likely responses of selected bycatch species to the PNMS. It takes into account historic fishing levels in the DFZ and the extent to which home ranges and critical habitat for these species are encompassed within the sanctuary. The study is expected to serve as a baseline for bycatch mitigation and monitoring options for an anticipated domestic tuna fishery, and as a basis for future assessments of the sanctuary’s performance as it relates to threatened bycatch species.