Bathymetry is the measurement of water depth. This information has many uses, including creating charts for maritime use to modeling currents influenced by underwater topography. CRRF is actively engaged in conducting bathymetric surveys in the shallow inshore areas and the outer reef slopes around Palau, to depths of  500 m (1,600 ft). This will be combined with other bathymetric data collected from greater depths, to produce a “Bathymetric Atlas of Palau” in the near future.

CRRF has a dedicated multibeam sonar (WASSP F3 160 kHz), purchased with funds from the National Science Foundation, installed on a 12 m catamaran, the Kemedukl, which undertakes regular mapping surveys through a grant from the Office of Insular Affairs, U.S. Department of Interior. Our mapping specialist Alex Ferrier-Loh, along with boat operator Matt Mesubed, spend many hours at sea every month gathering bathymetric data building up the overall map of Palau’s underwater realm. 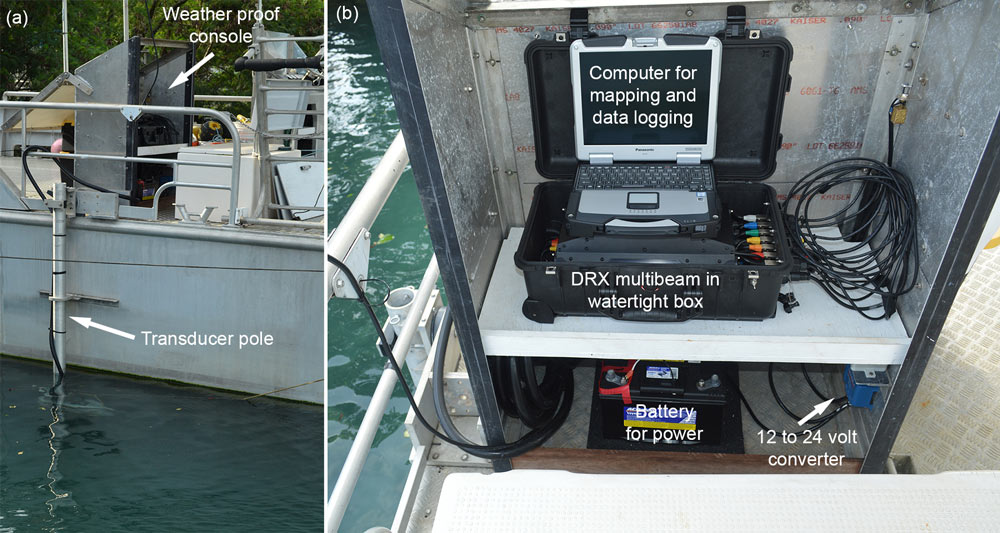 Surveys are conducted at relatively slow speeds (2-6 knots), tracking over the seabed with the depth sounder ”painting” a swath of seafloor beneath the boat. Successive swaths, with the boat moving in a pattern known as ‘mowing the lawn’, are merged together to form the entire survey, giving a picture of the slope and other features on the reef into the deep ocean.

We will combine our data, which goes down to about 500 m (1600 feet) in depth, with deeper ocean surveys conducted by oceanographic ships. This allows us to prepare a hybrid maps covering depths from only a few meters down to the 8,000 m (26,000 ft) depths of the Palau trench! 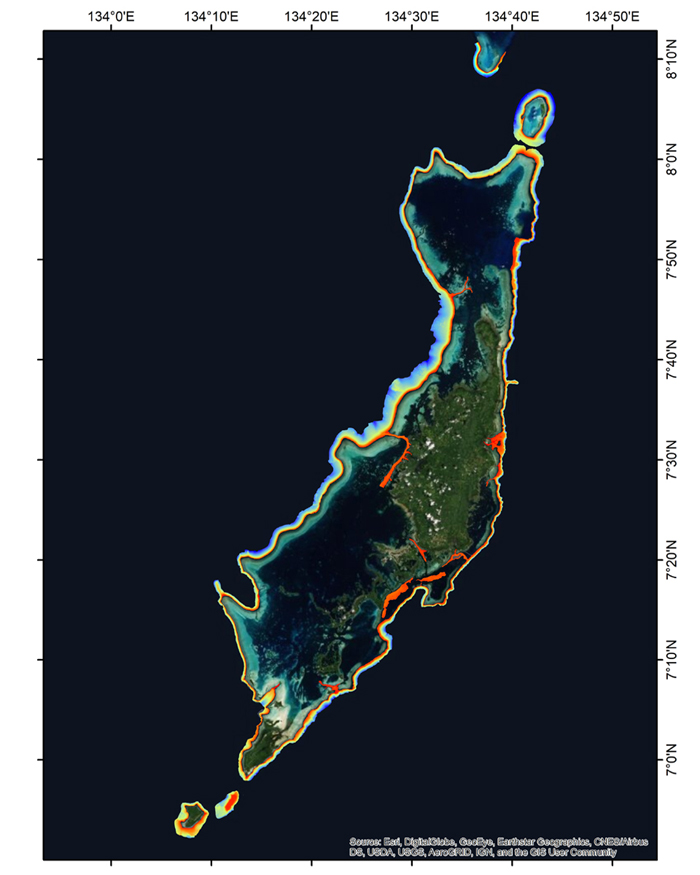 In 2011 Scripps Institution of Oceanography (SIO) Coastal Observing Research & Development Center (CORDC) and the R/V Roger Revelle (SIO) with CRRF started conducting large scale multi-beam sonar surveys around Palau. The R/V Revelle has a full ocean depth multi-beam sonar that can image the seafloor in any area of the Palau EEZ, although is not effective at depths shallower than 200 m. In 2013 the ship did two circuits around the main Palau Island group to image the entire outer slope of the islands. This allowed the preparation of highly detailed images showing the structure of underwater canyons and other features, including the Palau trench. After the initial survey circuits around the main group, the R/V Revelle continued on to each of the SW islands of Palau (Sonsorol, Fana, Pulo Anna, Merir, Tobi and Helen Reef) and performed multibeam sonar surveys around them. All of these have steep outer slopes that plunge quickly to depths of many thousands of meters. 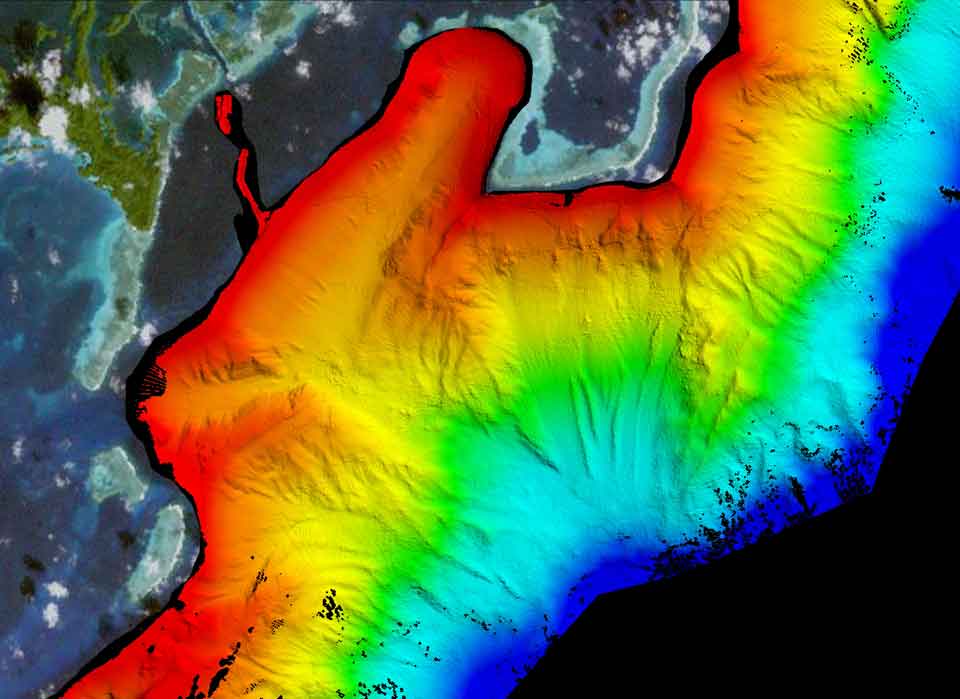 The highly detailed images show the structure of underwater canyons and other features previously unknown. The colorful maps, where color is associated with depth, are combined with either satellite images or aerial photos to place the surveys into context with the surrounding topography. Also mapped was the “Short Drop Off” basin on the central east side of Palau, going down to depths of nearly 5,000 m. The bathymetry is shown against a satellite image of the shallow reefs and islands outside the survey. The submarine canyons and alluvial plains seen were not known previously for Palau.

Multi-beam bathymetric data can also be presented as an oblique view (an angled perspective), with colors indicating depth and showing the relief and topography of the study area. The view of “Croc Head”, a promontory on the western barrier reef of Palau, shows vertical escarpments, reentrants and the generalized slope of the reef to a depth of nearly 200 m.

A detailed perspective view of an area of Short Drop Off indicates a vertical escarpment from about 90 to 120 m depth. This was verified by both submersible and mixed-gas diving, and is a spectacular escarpment. A geologic feature at 120 m, seen in the multi-beam images, is believed to represent the low stand of sea level during the last glacial maximum. The reef structure above this depth was actually exposed above sea level and eroded away by the elements to an extent. When sea level started rising again, about 20,000 years ago, the previously exposed reef was now submerged and reefs started growing on the limestone rock, but there was a discontinuity between the earlier “Pleistocene” reef rock and the more recent that is reflected in the horizontal feature. 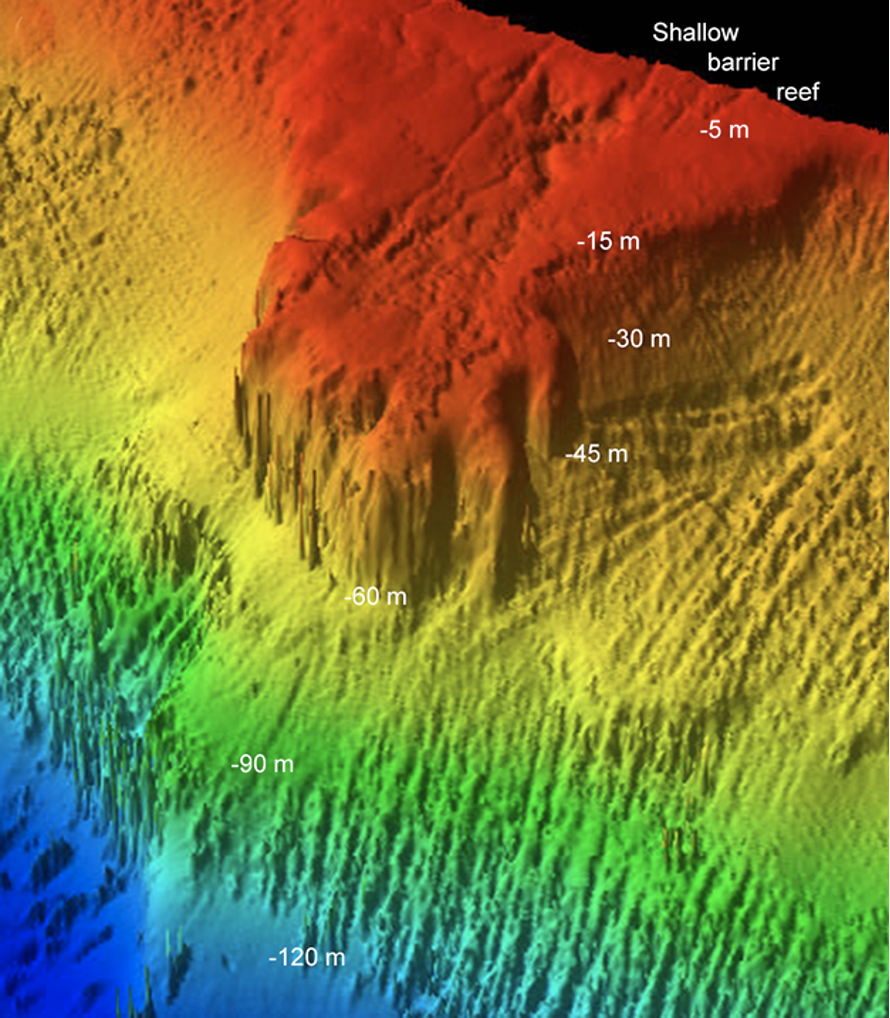 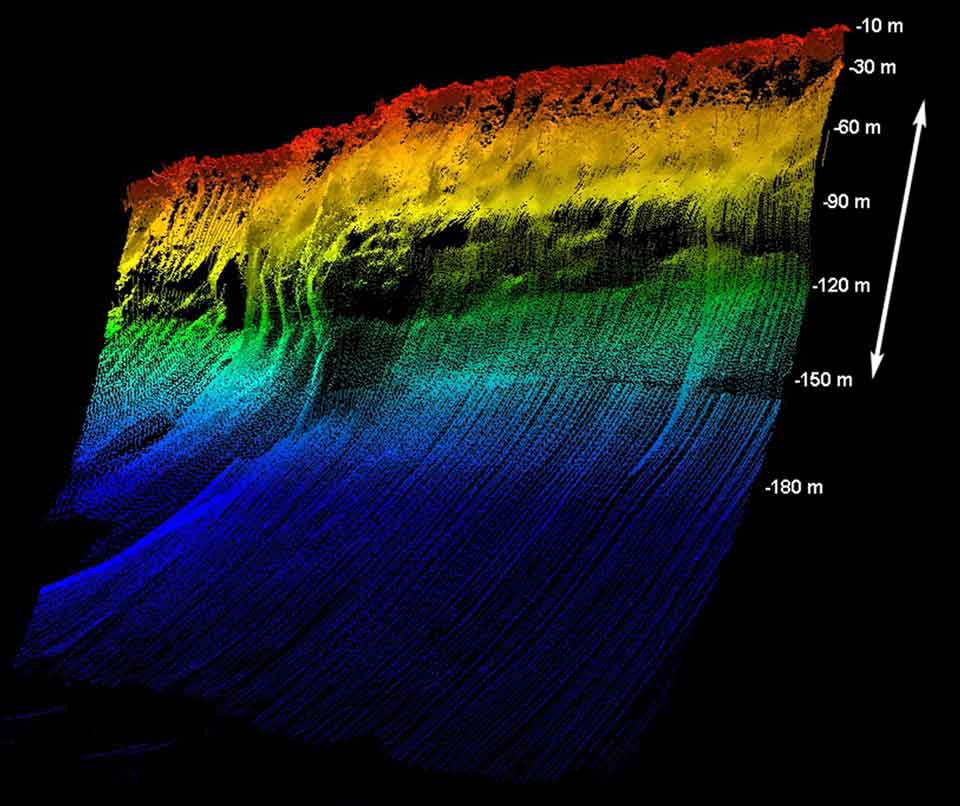 As reef scientists we are also very interested in the shallow water bathymetry and less powerful multi-beam sonars, compared to the full ocean depth system on the R/V Revelle, are used to image areas along the reef. Increasing depths from the multi-beam survey are typically shown as different colors, such as the Wonder Channel survey. The survey is shown against a vertical aerial image of the area showing islands and areas outside the survey as they actually appear. This has allowed us to image many of the outer reef areas popular for diving, as well as special interest areas within the lagoon. The fine detail of such shallow multi-beam sonar images also allows scientists to see the roughness (rugosity) of the outer reef walls and slopes, factors that affect the currents coursing along them. Such surveys are important in understanding ocean currents along the reef, how the reefs and islands affect ocean circulation, the, geological history of the reef, and how organisms relate to and use topographic features for events such as spawning. 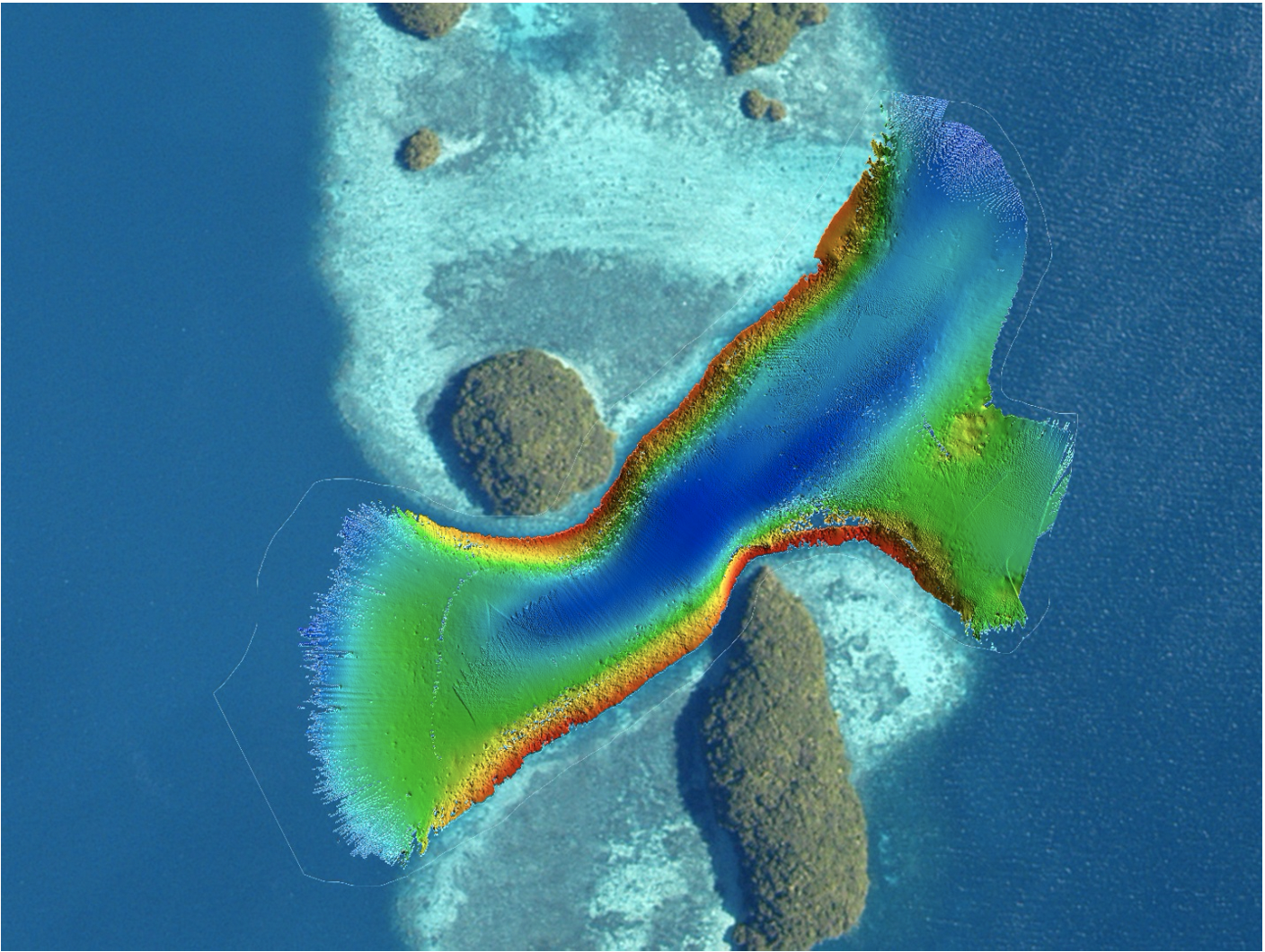