Jellyfish Lake became an icon of Palau in 1982 when it was featured in National Geographic. The risk of non-native invasive species may be the greatest threat to the lake and we must all become caretakers of this special place.

The millions of golden jellyfish found in Jellyfish Lake are a unique subspecies, Mastigias papua etpisoni, named after former President Ngiratkel Etpison. This subspecies is found only in this marine lake, and nowhere else in the world.

Jellyfish Lake is one of the isolated, stratified (meromictic) marine lakes. The lake’s edge is lined with mangrove trees and their roots are covered with a colorful assortment of marine invertebrates. Jellyfish Lake is 400 m long and 30 m deep. Between 13-15 m, there is a pink layer of bacteria and below that, there is no light and no oxygen. The bottom water layer is filled with poisonous dissolved hydrogen sulfide gas. The lake has numerous indirect connections to the lagoon and the tidal rise and fall is delayed by two hours (compared to the lagoon). The tidal range is 45% of that in the lagoon (2 m), or about 0.8 m. 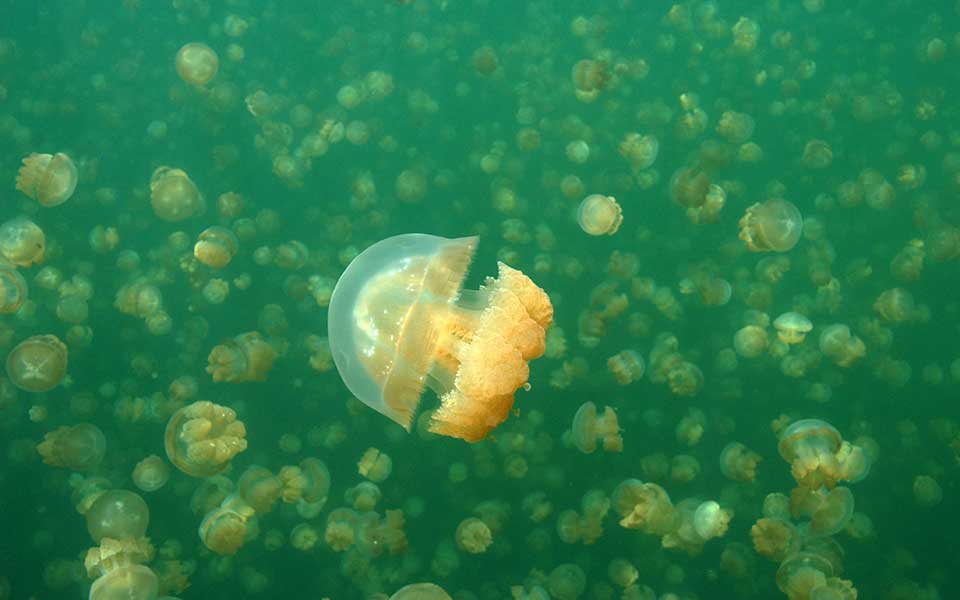 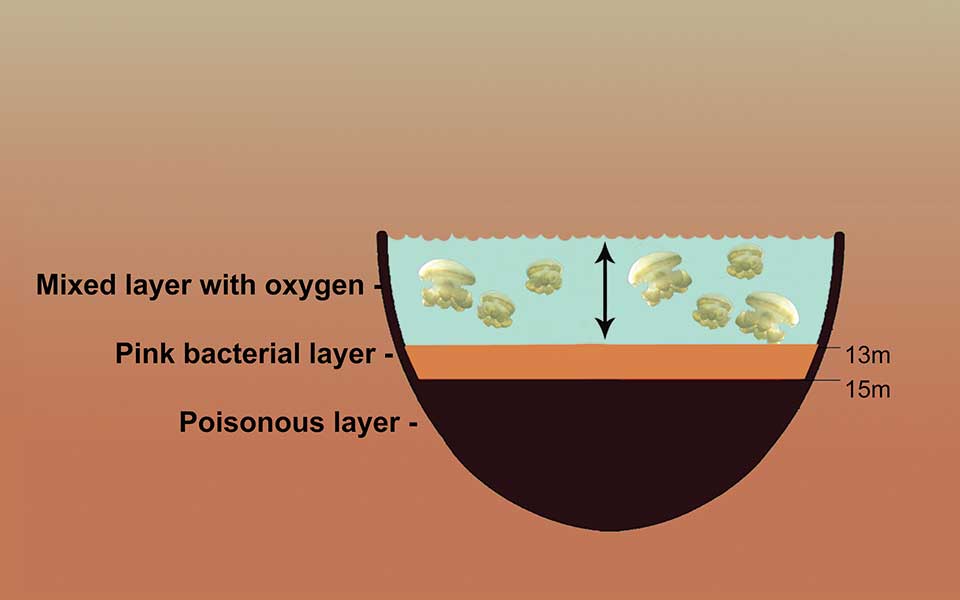 Jellyfish have two alternating life stages, the medusa and the polyp. The medusa life form is the golden jellyfish people see when snorkeling in the lake. The tiny 2 mm polyps live at ~10 m deep along the sides of the lake and produce new medusae. Contrary to popular belief, these jellyfish DO have stinging cells used to capture tiny organisms (zooplankton) for food. They inherited the stinging cells from their lagoon ancestor Mastigias papua. However, you are unlikely to feel it as the sting is very mild and essentially harmless to humans.  A popular myth is that the jellies are stingless, having lost their ability to sting because there are no predators in the lake.  This is not the case – some of the jellies do need to feed on zooplankton.  This fact was probably critical to the lake’s response to the 2015/2016 El Niño (below).

Jellyfish Lake golden jellies have adapted to life in this particular lake. They swim in a migratory pattern seen only in this lake. As the sun rises, jellyfish swim towards the sun in the east until they reach the shadow line formed by the surrounding rock island and trees, where they stop. The shadow line acts as a false edge to the lake, and the jellies make sure they are always in the sunlit seawater. As the sun passes overhead around noon, the jellyfish turn and again swim towards the sun heading to the west shoreline where again they stop at the shadow. This remarkable behavior forms large masses of jellyfish swimming in one area. On sunny days in the morning a spectacular “wall” of jellyfish can be seen underwater along the far shadowed edges of the lake. One explanation is that the jellies swim this way to avoid the real edge of the lake where their natural predators wait.

There is a natural predator of the Mastigias jellyfish in the lake, the endemic sea anemone Entacmaea medusivora. “Medusivora” means medusa- eater, and the anemones occur at the edge of the lake, patiently waiting for jellyfish to brush up against their outstretched tentacles.  When this happens, these anemones shoot out nematocysts to immobilize and catch the jellyfish. They then slowly engulf their prey. Much larger in size than the anemones, but made up mostly of water, the jellyfish are eventually entirely ingested by the anemones.  The jellyfish avoid the anemones by not crossing into shadowed waters. Their daily migration pattern of swimming towards the sun keeps them away from the shadowed edges of the lake where the anemones live. When a tree falls into the water, the submerged branches provide a substrate for the anemones to extend out into the brightly- lit areas where they can catch the jellies. 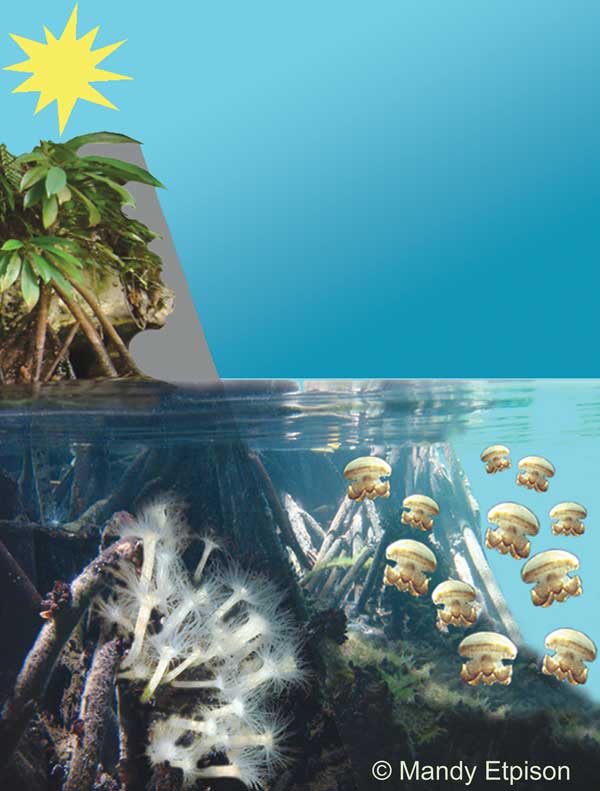 Apparently in response to the extreme El Niño drought in Palau in 2015/2016, the Golden jellyfish population dwindled, then disappeared with the last medusa seen in May 2016. CRRF has continued to monitor the recovery of Jellyfish Lake, with the Golden jellies virtually absent until late 2018, when the lake was finally starting to cool and the jellyfish population began to increase.  We documented the Golden jelly disappearance in 1999, following the previous and last strong El Niño, but were not yet working in the lake during the 1998 drought.  We have documented that the mean temperature of the upper (oxygenated) layer of the lake varies with climatic conditions; it is coolest during El Niño conditions, and warmest during La Niña.  But we had no information on the effects of a strong drought.  Collecting data from the lake prior to and during this entire El Niño cycle is a first, and data are still being analyzed.  The exact cause of the jellyfish disappearance is not yet known, but conditions in the lake changed dramatically.  Healthy polyps are abundant on the lake sides and production of medusae jellies depends on just the right environmental conditions. In 2019 the Golden jelly population is estimated in the millions. Following the lake’s recovery, we are working to determine indicators, or thresholds, for various stages of the lake’s natural cycles.

Non-native species are species that do not occur naturally in a particular place. Most non-native species usually have been introduced through human activity. Once introduced, non-native species have the potential to become invasive, overtaking space and other vital resources from native species. There are two confirmed and one suspected non-native species in Jellyfish Lake, two of which are classified as invasive. The sea anemone, Exaiptasia sp., and its symbiotic zooxanthellae are the two invasive species in Jellyfish Lake. They have no natural predators in the lake and have spread rapidly around its perimeter, dwelling on the mangrove roots and lake sides. They may have been introduced to the lake accidentally, carried in on a rock by a tourist. Before and after images of the lake’s side show the dramatic difference seen in the lake’s benthic organisms. 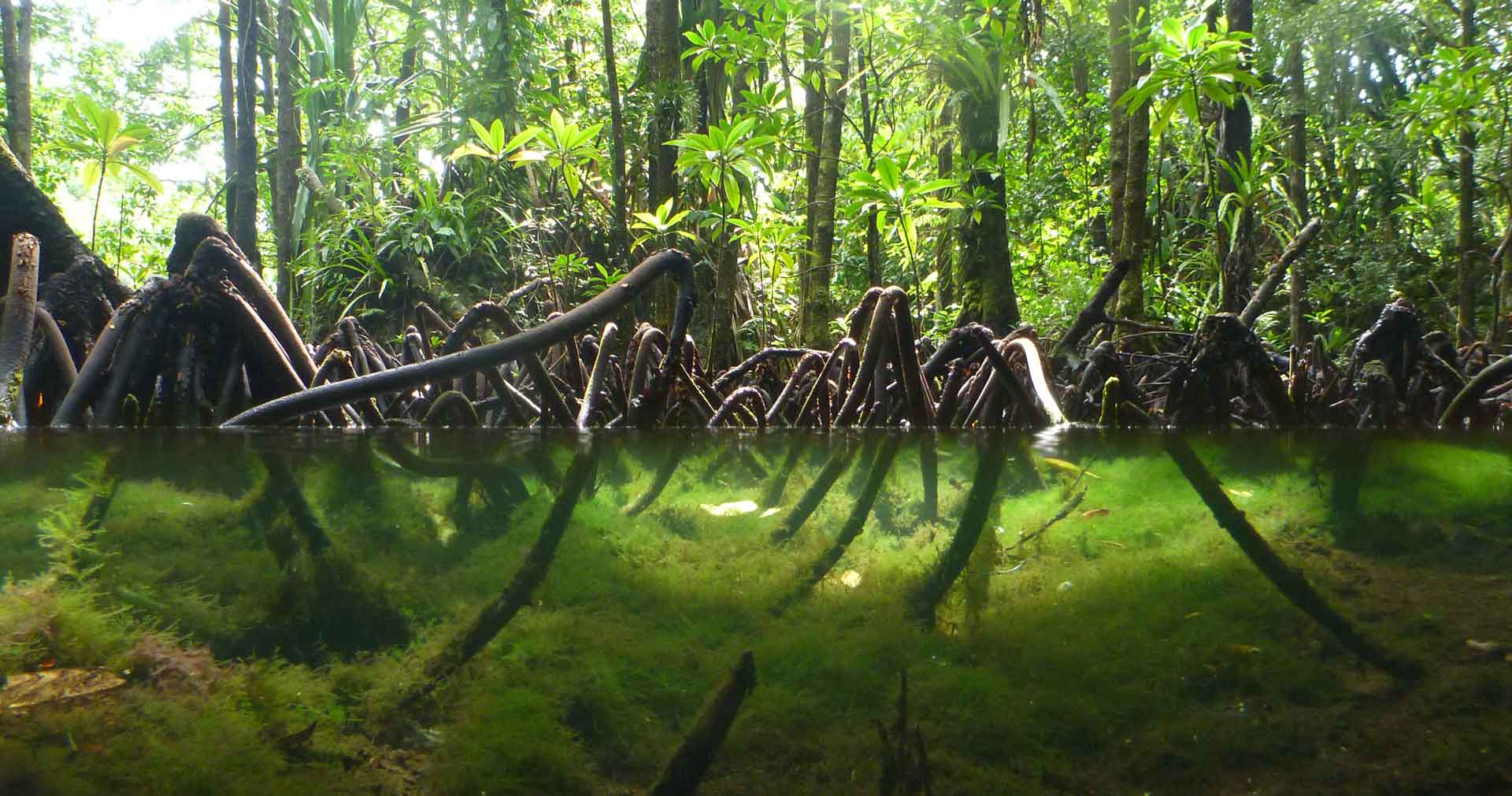