Climate change has many complex layers, including the multiple factors that can affect weather patterns and the subsequent ecological impacts. Through this project, we work on making this information more accessible and easy to understand for the general audience. With information drawn from the 2020 Pacific Islands Regional Climate Assessment report, the video presented provides simple and basic ideas at the elementary level behind climate change and its impact on Palau. This web page complements the video by providing a more in depth look at patterns of key parameters of climate change: sea temperature and sea level in Palau. Here, we focus on how climate change specifically affects Palau using a 20-year data set to look at short term variation of sea temperature and sea level in relation to ENSO events and overall long term trends.

La Niña – High sea water temperatures and high mean sea level (MSL). This can cause coral bleaching and mortality throughout the water column in an extreme event, and was the cause of the massive coral bleaching in Palau in 1998. Mean sea level is also high, but this does not adversely affect reefs through aerial exposure. Strong La Niña events can produce extreme amounts of rain, causing environmental damage.

Images reproduced by permission of Bureau of Meteorology, © 2017 Commonwealth of Australia

In Palau, El Niño and La Niña variation occurs regularly and has effects on most physical parameters, including sea water temperature, mean sea level (MSL), amount of rain etc. This variation is integral to the marine environment and underlies much of the diversity of conditions which support the marine habitats of Palau. Let’s take a look at some of these specific parameters.

Short Term Temperature Variation tied to ENSO
When looking at the mean sea water temperatures (for weeks, months and years) along the outer reef slopes of Palau, they show a highly variable environment with respect to temperature and depth, with ecological consequences. Much of the variation can be tied to ENSO conditions, El Niño and La Niña, cycling over intervals of several years. El Niño is associated with cool water temperatures both near the surface and at depths, such as in 2015-2016. La Niña has warm temperature along the entire reef slope, such as in 2010-2011. The red line shows the coral ‘bleaching threshold’ of 30.0ºC. Dotted lines show the trend lines of temperature at different depths. If only shallow depths (about 15-20 m) are considered, the variability is less, but still responds to ENSO conditions. 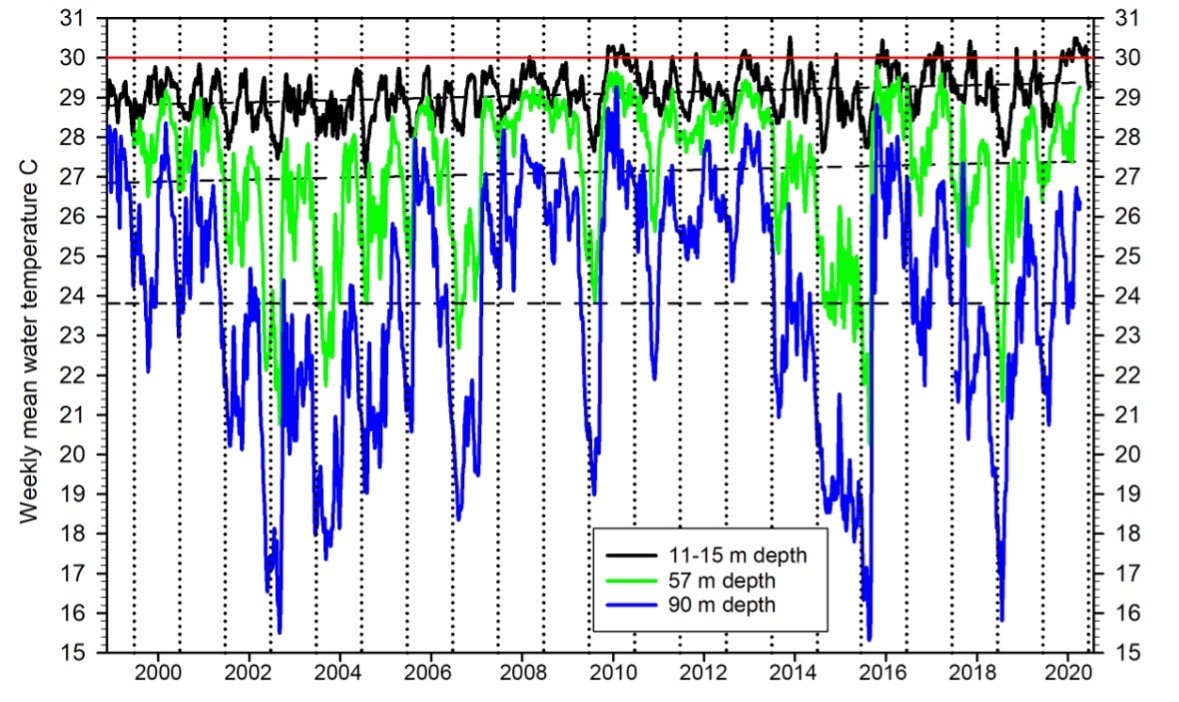 Long Term Temperature
Over the last 20 years, temperatures on Palau’s reefs have gradually increased at a rate of about 0.2-0.3ºC per decade (black line), rates which are close to the global rates of ocean temperature rise. Since 2010, there have been increasing occasions when shallow temperatures creep up above the 30ºC “bleaching threshold” (red line) for days to weeks. Unfortunately there is no comprehensive in situ data for Palau during the 1997-1998 El Niño/La Niña, which culminated in the horrific summer 1998 bleaching event. The general trend of rising water temperatures around Palau is worrying; by the mid-21st century temperatures will more often be close to the 30ºC level, and for longer periods.

Impacts
Generally, coral bleaching is associated with La Niña in Palau. During El Niño, when temperatures are low, deep mesophotic reefs become so cold that temperature becomes the limiting factor in the survival of deep reef corals (which do not do well in temperatures below 18-20ºC for long periods). A cursory look at the temperature by depth figure above shows that these cold conditions occur in the 57 to 90 m depth range.

On a purely physical level, it is new environmental territory for Palau’s reef corals as temperatures approach 30ºC more often and for longer periods . The abilities of stony corals and their symbionts to adapt to rising temperatures is uncertain, but qualitative evidence supports some ability to adapt to higher temperature conditions.

Tides in Palau are measured against the Palau datum, in either millimeters or inches/feet. The former is preferred for any serious discussion of tides and sea levels, while the latter is often used in tide prediction tables.

Short Term Sea Level Variation tied to ENSO
Palau has a semi-diurnal tide, two highs and two lows on a quasi-daily timing. The differences between high and low can be on the order of 2 meters over a single day on spring tides, or less than 1 m during neap tide periods. During El Niño events, mean tide is lower than usual, eg. 1998, and during La Niña events, mean tide is higher than usual, eg. 1988/89.

There is incredible short-term variability in Palau’s mean sea level that overwhelms and disguises the long term upward trend. This variation in mean sea level (MSL) is driven by ENSO and local oceanographic conditions, rather than conditions controlling global rates of sea level rise. 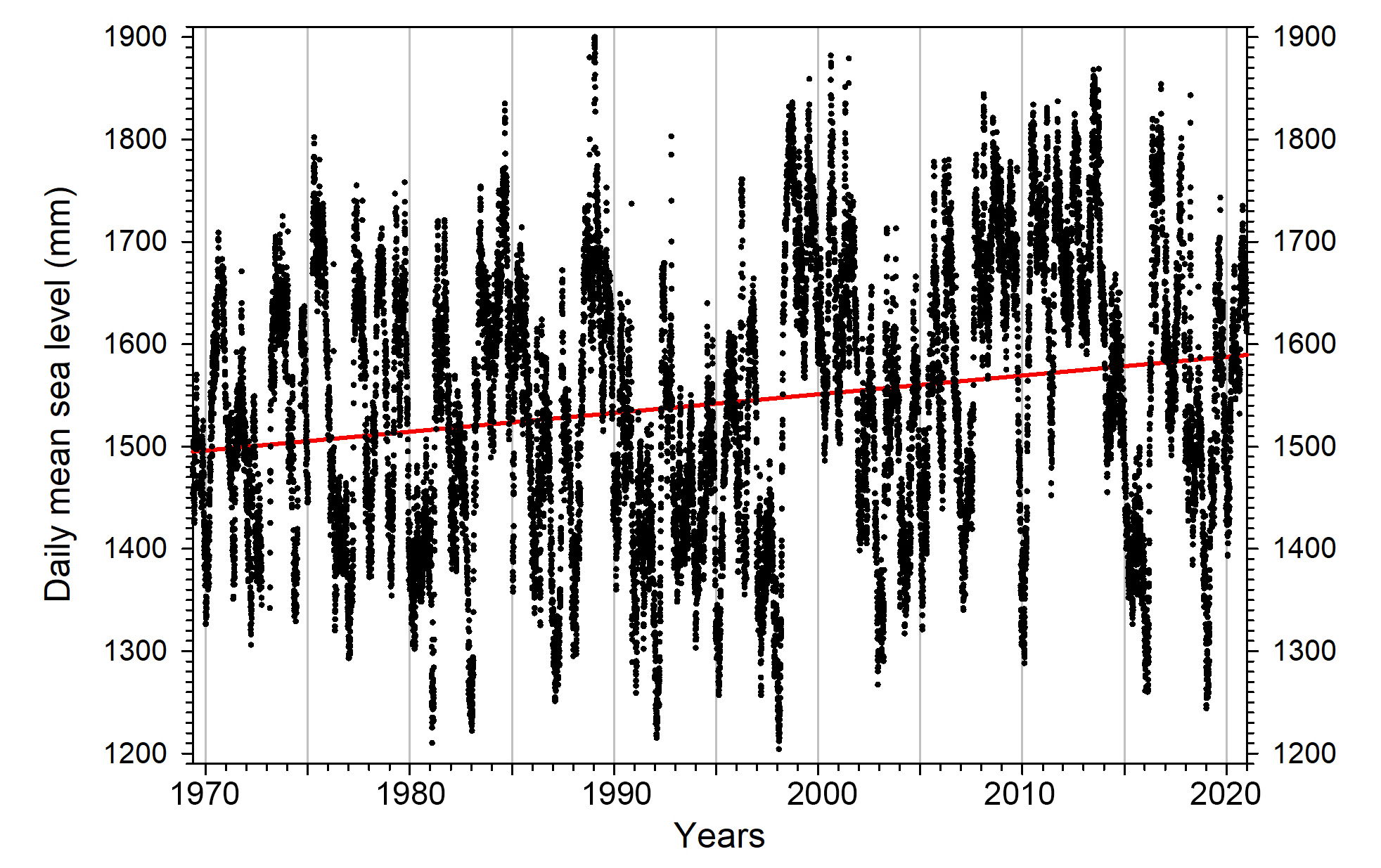 The changes in mean sea level over months to years are often confusing as multiple things can occur at once, some working together, some working in opposition to each other. As the figure above shows, the day to day MSL varies up and down by about 300 mm over periods of weeks to months. An observer may see a dramatic rise or decrease in sea level (other than the daily tides) and think they are seeing the results of global sea level rise, when in fact it is simply variation caused by ENSO, or El Niño/La Niña variation. Scientists can be fooled also if they limit their perspective to a small time period without looking at the big picture.

An extreme example of this variation is the time period at the end of 2015 and early 2016, indicated above by the red arrow. This period represents the shift between a strong El Niño and La Niña which was documented by Schönau et al. 2019.

This is also seen in the graphs below, mean sea level (upper) and sea water temperature (lower). MSL dropped slowly and gradually by 600 mm (60 cm) between mid-2013 and the end of February 2016 as El Niño developed, a decrease of about 0.66 mm per day over 960 days. That’s a very small number, less than 1 mm per day. What happened next was almost oceanographically unbelievable! The ENSO state rapidly changed from a strong El Niño to a La Niña. In early March 2016, MSL started rising in Palau, rocketing up the 600 mm in only ~ 70 days, reaching a rate of nearly 8 mm PER DAY for much of the time (upper graph). With mean sea level being interrelated with temperature, the water temperature climbed from some of the lowest shallow water temperatures ever seen in Palau to ~ 30ºC (lower graph) over this very short time period. This 30ºC temperature on Palau’s reefs is associated with coral bleaching. Fortunately the La Niña was short lived, and the ENSO state returned to neutral quickly, resulting in more typical temperatures and mean sea level conditions. 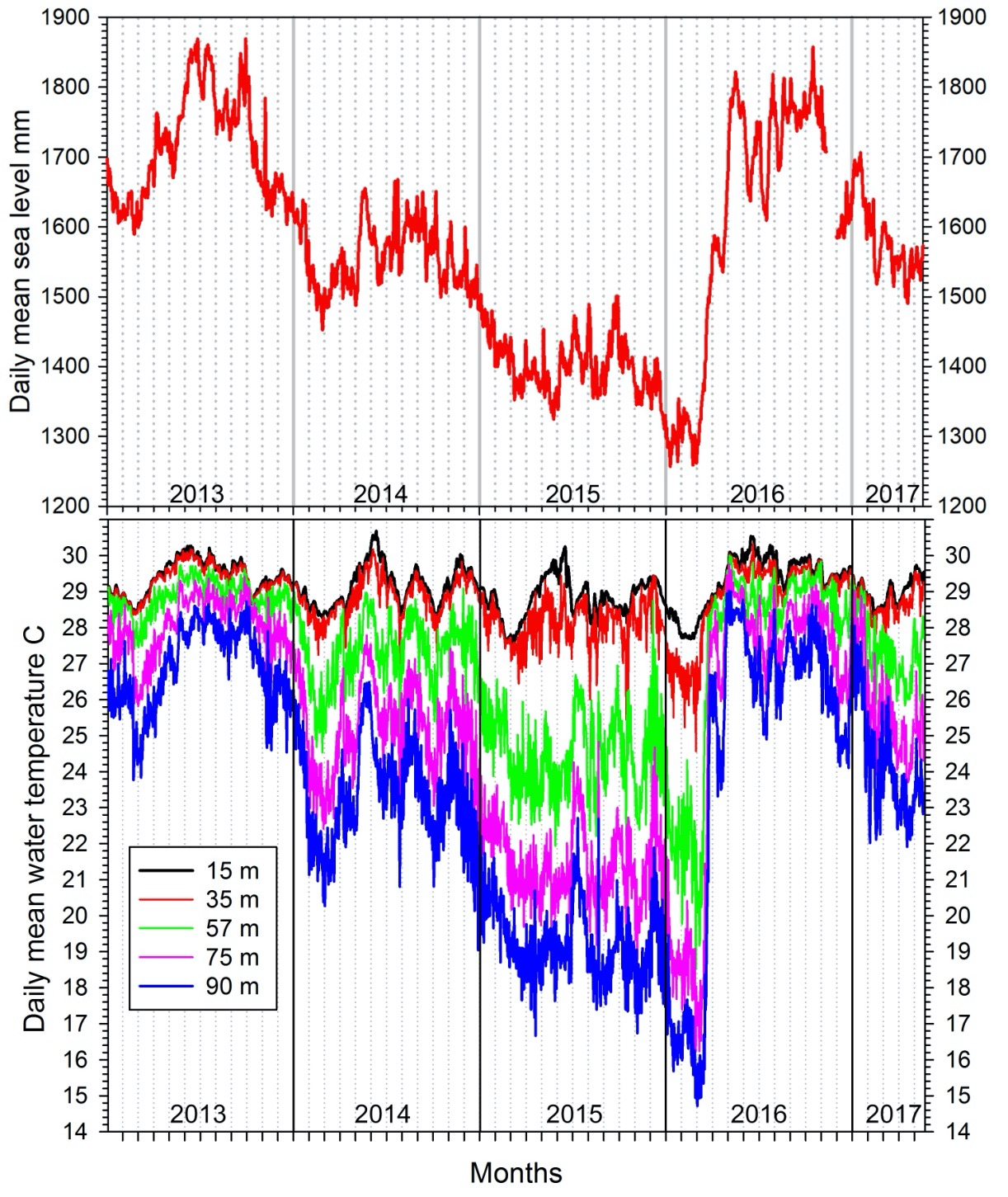 Long Term Sea Level
Globally sea levels are rising at about 3 mm per year, the result of melting of ice on land and thermal expansion of the water column with rising temperatures. If the last 60 years are considered, based on Palau’s tide gauge data from Malakal, Palau fits right into this upward trend of 3 mm per year (see long term sea level graph above, red line). 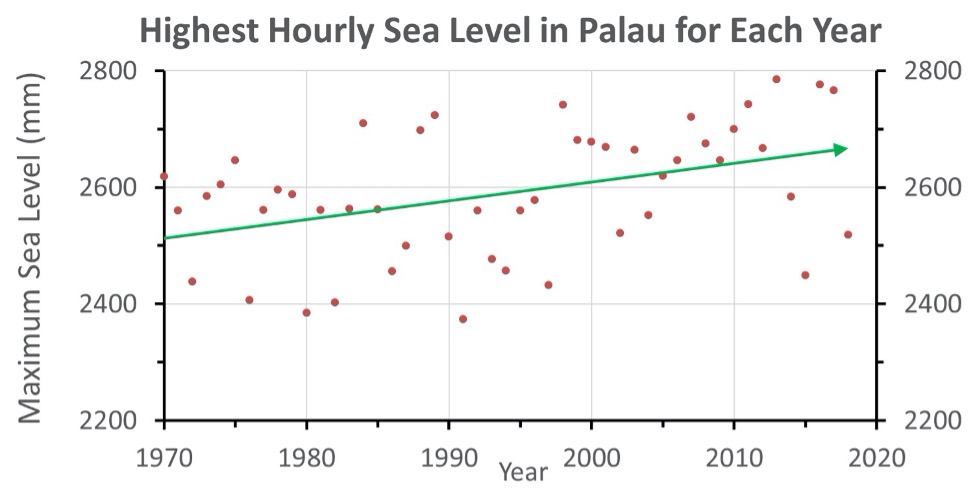 Impacts
Prolonged low sea levels can affect reefs. In Palau from mid-2010 to mid-2013 corals grew up to their limits during the high MSL, and in early 2016 extremely low MSL caused prolonged exposure to air on low tides of these same corals. Many of these corals died, as documented by Colin and Schramek 2020 below.

Higher than usual sea levels can lead to coastal erosion and flooding of low lying areas, taro patches and buildings along the coast. Salt water inundation into taro patches and homes along the coast usually occurs during La Niña events. During neutral or El Niño events, with normal to lower than usual sea levels, these areas are not flooded. An understanding of the variation of mean sea level during ENSO events is particularly important for building homes and structures near the coast, especially if building during an El Niño phase. Imagine land-filling and building according to the low mean sea level during an El Niño phase, only to be inundated during a neutral or La Niña event when mean sea levels are higher.

This climate change summary for Palau is supported by Canada Fund for Local Initiatives.