Spawning aggregations of reef fishes are among the most remarkable biological phenomena found in shallow marine waters.

What are Spawning Aggregations? 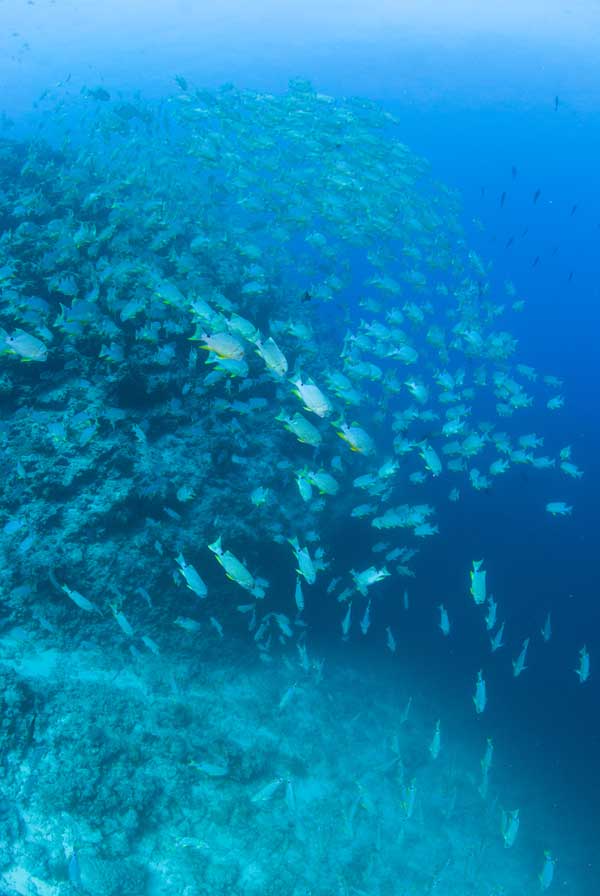 Nearly all the species of reef fishes which are important as human food have males and females which spawn in the water column and release planktonic eggs. The eggs drift away with the currents, hatch to larvae and develop in the water column, then after a few weeks to months they become juveniles and hopefully settle back on a reef to grow to adulthood. Spawning behavior of such fishes ranges from individual pairs to massive groups of thousands of individuals, the latter called reef fish “spawning aggregations”.

Spawning aggregations usually occur at specific times and places on the reef.  Where they are known, they have long been places where fishers, going at the right time to the right location, could catch substantial numbers of fish. Most known spawning aggregations around the world have been hard hit by intense fishing and many have ceased to exist and do not recover. The adult fishes forming aggregations are the ones most needed to reproduce for a number of years to insure continuity of populations, but their removal imperils the sustainability of populations of food fishes.

CRRF has been at the forefront of reef fish spawning aggregation research since the late 1970s. We have documented a few hundred species of those reef fishes that aggregate to spawn, but there are potentially a few thousand aggregating species.  We have learned the attributes of most species that have spawning aggregations.  They are medium to large reef fishes (up to the very largest) with planktonic eggs and larvae. They migrate to a specific area to spawn at a certain time, but the patterns vary across species, often with seasonal, lunar and daily components.

In Palau we have focused on a small suite of diverse species. Spawning aggregations of some species have been known by Palauan fishermen for generations and we work to verify that information and to expand knowledge of spawning to encompass the scope and importance of such aggregations.  For some fishes, we have “discovered” what may be previously unknown aggregations, or at least ones for which there is no recorded or otherwise documented information on their existence.  There are few things in marine biology more satisfying than learning some new secret of nature.  Doing so is really a privilege and makes the long days, boat trips in bad weather, and limited funding tolerable.

Some of the more interesting and important spawning aggregations in Palau are briefly described below.

The twin-spot snapper is a large fish, very common on outer and inner reefs. In the last few years this snapper has become known for its large aggregations (thousands of fish) which are now receiving scientific study.  The fish come together for a few days at some reef projections just before the full moon every lunar month of the year. They spawn early in the morning, after the time of high tide, and cast millions of eggs into the ocean to drift away.  The spawning event is so large that the water becomes milky with the sperm shed my males to fertilize the nearly transparent eggs released by females. Spawning goes on above the reef for as much as an hour, with groups of fish rushing upwards and releasing gametes, to be followed by another group and another, almost like fireworks going off.

We have also been measuring the size of fish in the aggregation using stereo-video. It has become apparent that the size of fish aggregating (440–660 mm) is much larger than the typical size of fish caught by most fishers. With limited biological data on this species we do not have an accurate knowledge of the size they reach sexual maturity, so we are investigating how this size of aggregating fish, measured with stereo-video, relates to the actual size at maturity.

The blackfin snapper is a small species of the family Lutjanidae, only about 20-25 cm in length when adult. Like the twin-spot red snapper it aggregates near the time of the full moon, again every month of the year. The aggregation site differs from that of the twin-spot snapper, either on the sides of tidal channels or along the slope of outer reefs. The females become swollen with hydrated eggs at the aggregation site, and the males are ripe and ready to spawn, but the actual spawning of the blackfin snapper has not yet been seen. It is likely that it migrates from the aggregation area to another nearby site in the cover of night to actually spawn.

The bumphead parrotfish is the largest parrotfish in the world, reaching over a meter in length. Both males and females have a bulbous protuberance on the forehead and normally graze the reef in schools. They come together around the time of the new moon, migrating in for a short spawning period early in the morning for a few days in succession to spawn. After reaching the site, they mill about for a half hour or so, then rise up into the water column away from the reef to engage in group spawning, similar to what is seen in snappers. After 30-45 minutes, they stop spawning, go back to the reef and migrate back to the home areas. Although the largest species of parrotfish, their clear spherical eggs (only 0.65 mm in diameter) are one of the smallest of any parrotfish.

The humphead wrasse, often called the Napolean fish or Maori wrasse, is the largest wrasse in the world, males reaching at least 1.2 m in length. It spawns in aggregations of many females and a limited number of males.Like parrotfish, it is also a species that can change sex, from female to male, during its lifetime. It is believed to spawn nearly every day of the year in Palau, with groups of fish undertaking relatively short migrations to come together at aggregation areas a few hours after high tide. Male humphead wrasse patrol along the outer slope of the reef, displaying themselves for the females to see. If ready to spawn, a female will rise up from the reef to join the courting male and they release eggs and sperm after meeting side to side. After release the female dives for the safety of the reef while the larger male starts courting again, looking for more females with which to mate. The eggs are taken out to sea away from the reef by the falling tidal currents, but do not move any great distance away from the reef. They are then swept whatever direction the ocean currents might be running at the time and can even be brought back into the lagoon on the next rising tide. You can read more about this species’ spawning habits in Colin, 2010 cited here.

The moorish idol is not a commercial food fish but its spawning aggregations are unusual and striking for divers to see. The schools of moorish idols on the outer reefs of Palau have been known for some time, particularly since divers starting visiting these reefs regularly, but only recently has the spawning been documented. At certain times of the winter and spring, groups of up to several hundred moorish idols will be found coursing up and down the outer reef slope at mid-day. After doing this for some time, without warning, the group will swim up into water column towards the surface and out to sea, away from the reef. They spawn after reaching near the surface and can be ruthlessly eaten by sharks and other predators while away from the protection of the reef.  The blue water spawning of moorish idols has recently been published by Mandy Etpison and Pat Colin. 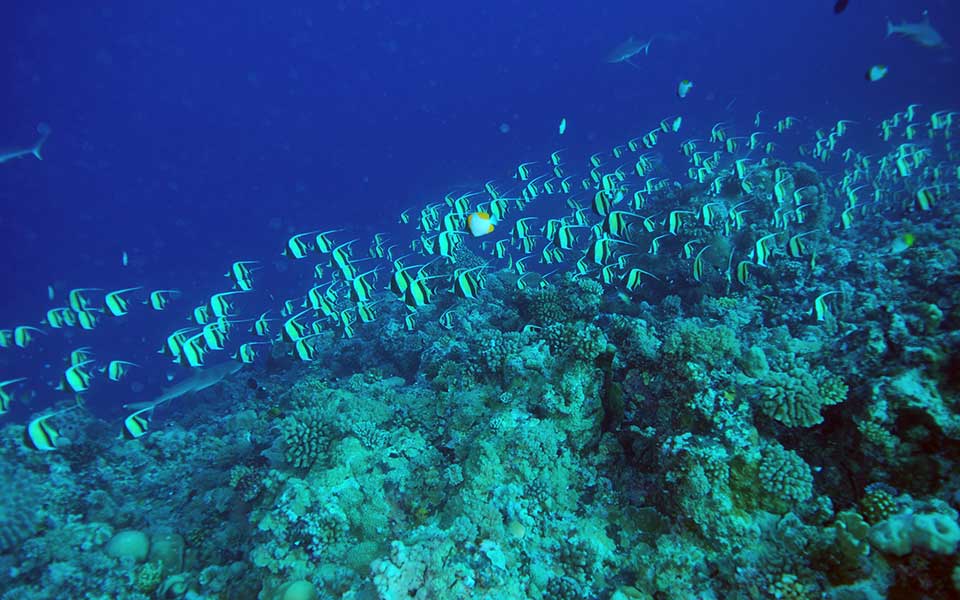 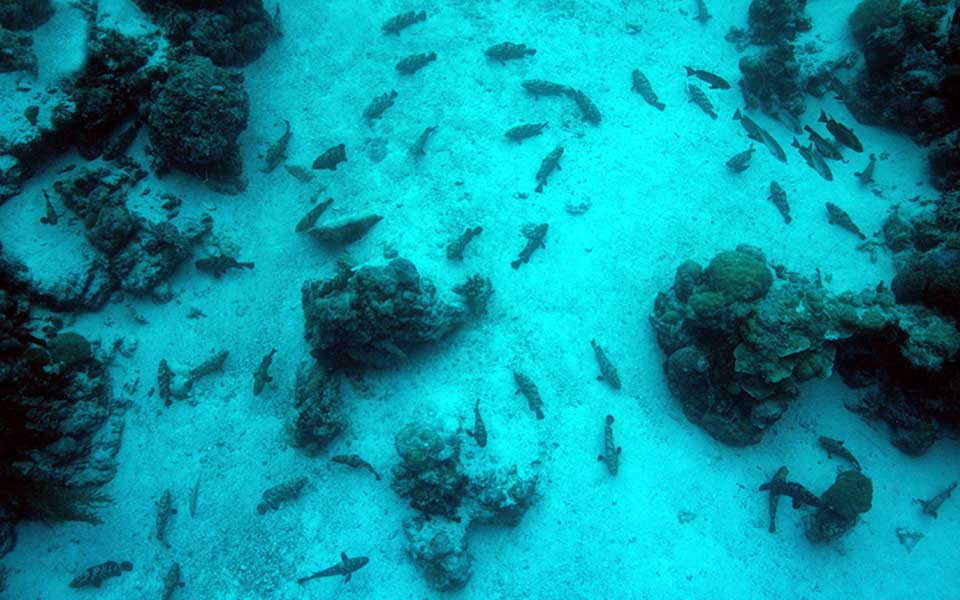 The camouflage grouper is a typical medium-sized Indo-west Pacific grouper. It usually aggregates with two other species, the brown spotted grouper, Epinephelus fuscoguttatus and the coral trout, Plectropomus areolatus, in Palau and elsewhere. This is so common the three species are known as the “trysting trio”; they seem to prefer channel bottoms or reef slopes for aggregating. They usually differ slightly in the actual area the aggregations occupy, but when large in size, the aggregations tend to overlap one another somewhat. They each have a seasonal component to aggregation, usually coming in large numbers to the site only 2-3 months a year.

Although these aggregations have been known for decades, observations of the spawning have only recently been made. For E. polyphekadion it has been observed spawning at night, usually about 4 hours after sunset.

How do we study spawning aggregations?

The study of fish spawning aggregations often begins with either chance observation or by listening to information from traditional fishers who may have learned of such aggregations generations ago.  We know that many species aggregate near the time of either the full or new moon and spawning can occur around sunrise and sunset, so those are particularly good times to be looking for fish aggregations.

Once an aggregation is located  we want to know many things, such as:  1) how many fish are in it,  2) what size are they in area, 3) what is their reproductive condition, 4) how long will they stay at the site, 5) will they return later if they leave, 6) what is the seasonality, if any, etc..  Many of these questions can now be approached scientifically in a much more rigorous manner than even a decade ago.  Still and video cameras allow documentation of behavior in great detail.  Time lapse still photography, having a stationary camera taking photos at a regular interval where the aggregations occurs, can be used to determine the presence or absence of an aggregation for several days on end, something impossible to do with diving techniques. Stereo-video camera systems can be used to determine the lengths of fishes within aggregations to a high degree of accuracy.

Estimating the numbers of fish in aggregations can be attempted using a number of techniques.  Simple line transects can be run through the area of aggregation with counts of fish made over time or distance swum.  If fish are spread out over a fairly broad area, a preferable technique is for a diver to tow a logging GPS unit on the surface while counting fish on a minute-by-minute basis. This can allow much of the aggregation to be covered and the counts can be related to the  the distance (and area) of each one-minute survey with GPS positions.  This allows construction of a map of geographic density for the aggregation that can be repeated any time in the future. This type of plot is useful because it shows not only the areas where the fish are, but also the areas where they were not present.  The geographic extent of an aggregation is quickly apparent from a single species plot.

More information on the study and conservation of reef fish spawning aggregations can be found in this manual prepared for SCRFA (Science and Conservation of Fish Aggregations).