To understand the biology and ecology of the marine environment, we need to understand the physical processes and their natural variations that influence the different marine habitats.

Physical oceanographic instruments allow measurements of important processes affecting the marine environment.  Some of the instruments used in Palau are:

CRRF participates in this work throughout Palau in collaboration with our colleagues from Scripps Institution of Oceanography, the University of Delaware, University of Hawaii and the Office of Naval Research.

While the tides may seem a simple parameter to understand (they go up and they go down mostly due to gravitational effects of the moon and sun), they are affected by many external factors.  Hence tide tables are nothing more than predictions, based on past measurements, and the actual sea level data making up the tide can differ.

Palau has an excellent tide gauge, run by the University of Hawaii Sea Level Center (UHSLC), located on Malakal Island which has provided quality data since 1969.  The tidal range in Palau between high and low tide, on a spring tide, can be as much as 2 m (78 inches).

There is local belief that the tide state can vary from north to south within Palau by as much as an hour.  We asked this question early on by deploying our own array of a dozen pressure loggers (“tide gauges”) in 2010. Data showed little actual variation in tide geographically within Palau.  But it also showed that wind and waves could produce some differences in the timing of tides north to south. At present, for our own purposes CRRF now has two permanent stations:  1) CRRF dock and 2) Malakal Harbor to compliment the Malakal tide station readings.  CRRF also maintains a series of loggers in various marine lakes, as the tides in the lakes are damped and delayed.

An important aspect of climate change is the mean sea level (MSL) variation.  In Palau, between 1969 and 2016 mean sea level has varied, with the most dramatic changes associated with El Niño and La Niña events.  Overall the mean sea level in this 46 year period has increased about 2.3 mm per year. In the short term, one or two years, the results can be different.  In the past decade Palau’s sea level was reported to be rising 9 mm/yr, based on satellite sea surface height data from 1992 to 2010 (red regression line in Figure).  This was actually true for that time period, but expanding the record both before and after indicates the overall rate falls back to less than 3 mm a year and is consistent with worldwide sea level rise rates. 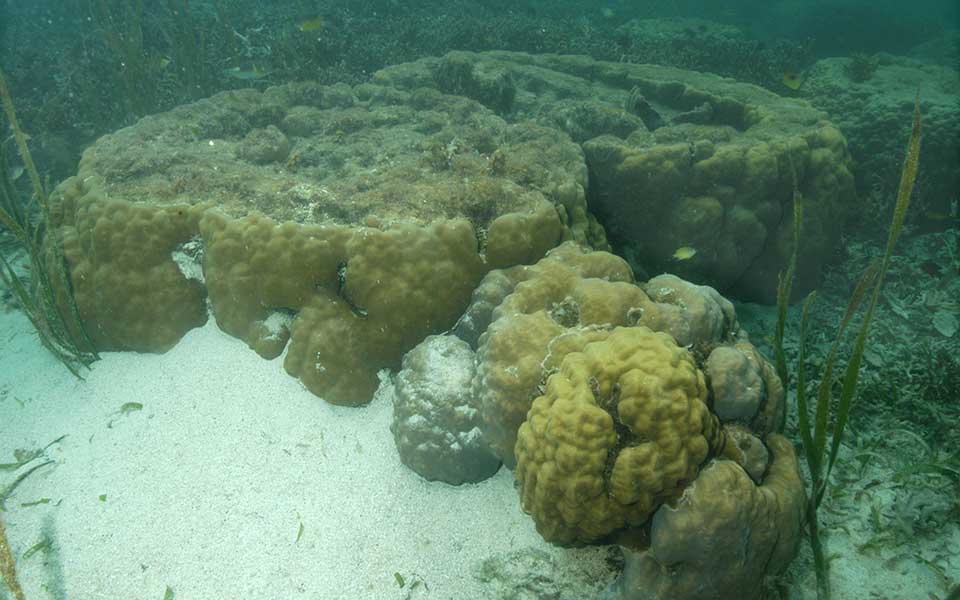 Coral death from low mean sea levels was one of the effects seen on shallow reefs in 2015 due to the El Niño-associated exceptionally low tides.  This produced widespread coral death on the uppermost portion of coral colonies in shallow reef areas, particularly for massive Porites corals, as well as branching corals, in shallow areas.  During the high mean sea levels of earlier (non El Niño) years, these corals had grown progressively  higher and, when mean sea levels went down as much as 50-60 cm, they were then consistently exposed to air for long periods. A shallow water sponge, Stylissa massa, was similarly affected on Palau’s shallow reefs.   El Niño extremes that drop sea levels a half meter or more in Palau, leading to coral death, probably are one of the processes that control and limit the upward growth of reefs over time.

Palau is situated in an area of active oceanic currents in the western Pacific. The North Equatorial Current (NEC) is usually found running east to west just north of Palau, but often impacts the eastern side of the main Palau group.  The North Equatorial Counter Current (NECC) moves the opposite direction, south of the main Palau island group. These oceanic currents hit the face of Palau’s outer reef, as the reefs are very steep and drop off to oceanic depths from shallow water quickly.

These currents are important as they are the connection of Palau with the rest of the ocean.  They transport water masses with larvae of marine organisms to or from Palau and are critical in concerns about fishing, search and rescue, pollution and marine debris. Much of the information on ocean currents is based on satellite remote observations, such as sea surface height or tracks of drifters in the open ocean. Islands and reefs interrupt the unobstructed flow of the ocean currents, producing patterns of circulation which are hard to model and predict. Data gathered locally through direct instrument measurements of critical in understanding the relationship of island/reefs with the surrounding ocean, information that is important for navigation, fishing, marine resource management and search and rescue efforts. Such models are being constantly refined, based on new data such as that gathered in Palau.

Simplistic representations of these ocean currents show them as vector arrows running in fairly regular paths, with an area of eddies and other interactions between them.  Like most things in nature it is more complicated than that, with each of the major currents (NEC and NECC) being masses of eddies swirling along as the overall water mass moves east or west.  When the westward moving NEC hits the east side of Palau, it can divide into two branches, one going south to the area of Peleliu and Angaur while the other goes north to the area of the northern reef complex (Kossol and others), Kayangel and Velasco Reef.  Here the currents are squeezed between the islands and reefs becoming jet-like with accelerated current speeds and spinning off vortices at the edges of islands and reefs that migrate out to sea with the general current. The water passing around Palau also curves back in on the western side of the main group forming a series of eddies there which circulate far offshore of the western reefs or move into the area of the reefs themselves.

For the past several years CRRF and our collaborators have maintained a network of five Acoustic Doppler Current Profilers (ADCPs) on the outer reefs of Palau to examine how currents along the reef are structured.  The ADCPs measure currents at multiple depths above them and are a basic tool of physical oceanography today. 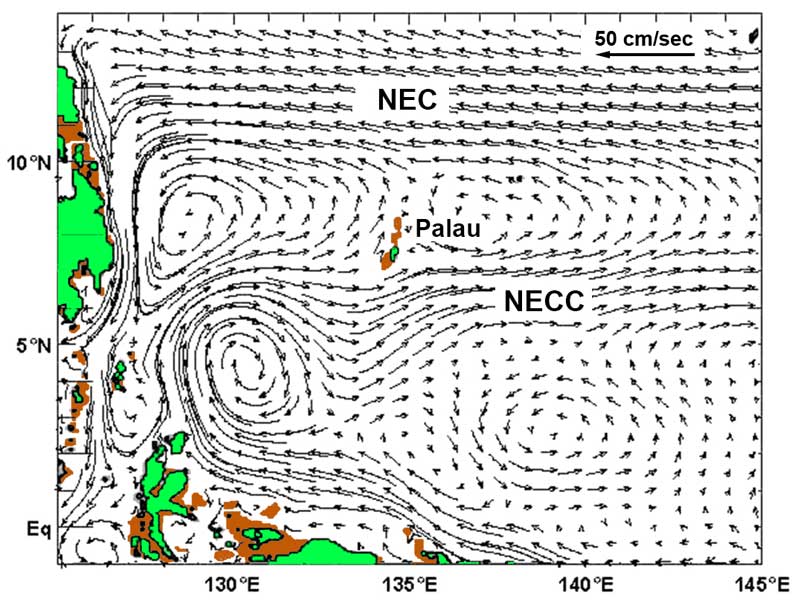 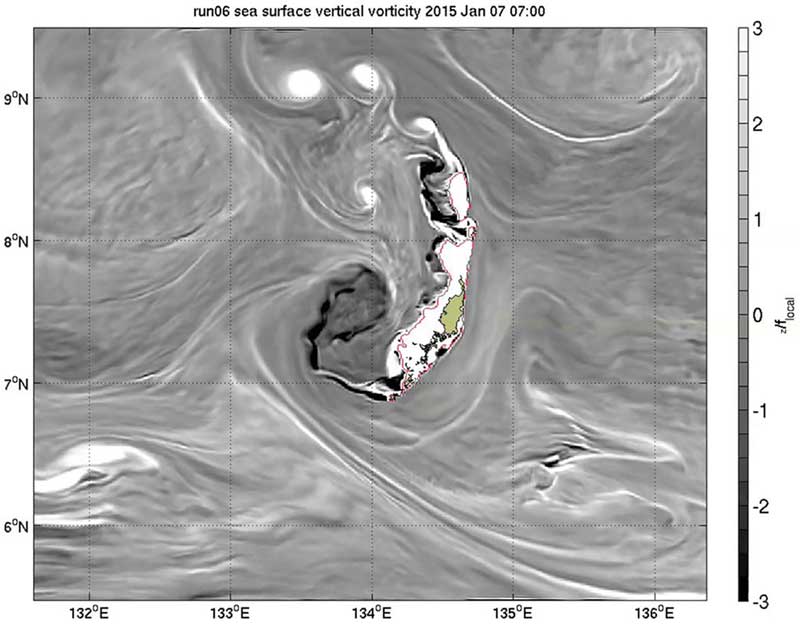 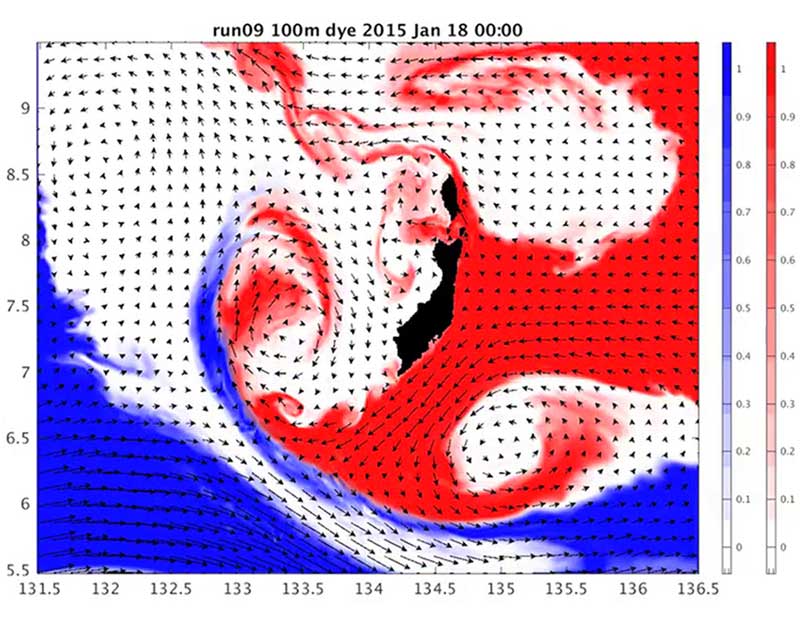 Another important tool for studying currents are ocean ‘gliders’ that gather current speed & direction, and physical information, such as temperature and salinity, over depth.  Gliders use buoyancy to make them go up and down, with wings and fins to control their track through the water.  They can relay this information to a shore base after dives to several hundred meters, and stay at sea for several months.  Gliders are largely autonomous except for communicating via satellite links with controllers in shore stations.

Dan Rudnick at SIO has been using Spray gliders in and around Palau since 2009, looking at first the transport across the North Equatorial and Mindanao Currents. More recently two gliders have been used to simultaneously profile the eastern and western side of the northern reef tract up to Velasco Reef to observe eddying in these areas. Spray information, including tracks, profiles of currents and values recorded on dives are available here.

More recently the Coastal Oceanographic Research and Development Center (CORDC) of Scripps has set up three station High Frequency Radar surface-current measuring network for the east side of Palau. Stations are located in Angaur, Melekeok and Kayangel with the system providing a picture of surface currents every hour. They provide overall estimates of water transport around Palau and near real time current speed and direction information, useful for Search and Rescue efforts. Maps of current patterns can be seen here.