The Coral Reef Research Foundation (CRRF) is fortunate to have a director (Pat) who is a light aircraft pilot, and talented enough to build his own plane too!  Pat’s plane is dedicated to obtaining aerial photographic images of environmental areas of interest. A modified COZY III aircraft, constructed by Pat while based at Enewetak atoll, has been used as the ‘eye in the sky’ since 1983 to take aerial photos of reefs and islands in many areas of the western Pacific, including the Marshall Islands, Federated States of Micronesia, Papua New Guinea, northeast Australia and Palau.  Based at the Palau International Airport since 1996, the COZY is used to take both vertical and oblique aerial photos.  Photo flights are made when conditions are good to optimal, producing excellent geolocated images of high resolution using digital SLR cameras. 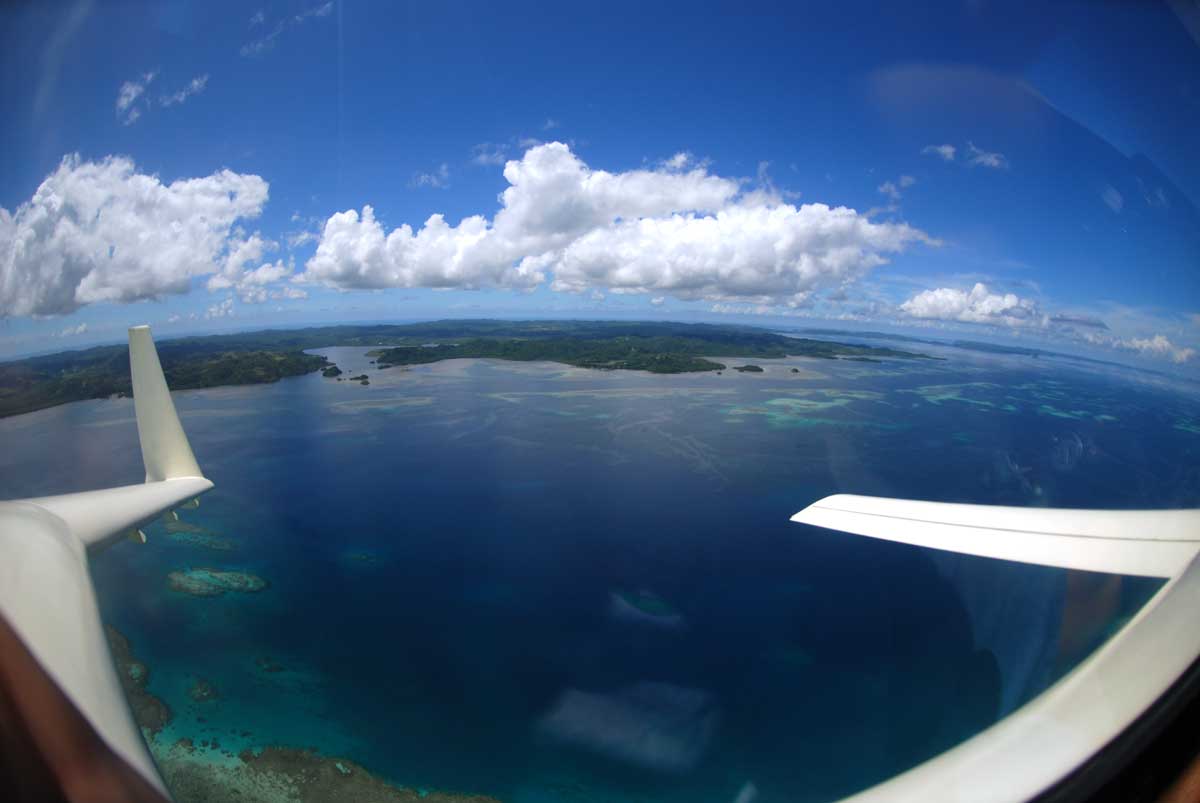 Images taken from above reefs and other shallow water areas are an effective way to record the distribution of various types of marine habitats within a given area. Aerial photographs may be either vertical (looking straight down) or oblique (looking at an angle).  Vertical photos often allow the construction of large mosaic images of areas , so the high resolution available with aerial photos can be applied over a much broader area than can be covered in one photograph.  Oblique photos show features that are lost in vertical images and can be stitched together into panorama views.

In Palau special emphasis has been placed on photographing areas that are undergoing changes due to human activities or natural causes, as well as areas that are poorly known where the aerials provide the first insight into what habitats occur there.  This is how the ‘Crop Circles’, Thalassodendron ciliatum sea grass beds, at Velasco Reef were discovered.

The construction of the 53 mile long “Compact Road” on Babeldaob Island was documented over 6 years (2000-2006) with both vertical and oblique aerials, mostly from less than 2,000 feet to record the construction activities, earth moving, landslides, and other aspects of the project. They are the only records of large scale soil disturbance from the project, and could be used to delineate where archeological areas might have been altered or disturbed. The Compact Road photos number nearly 5,000, shot originally on film but now digitized.

CRRF’s digital archive includes photographs of most infrastructure projects from 1998 onwards at all stages in their construction.  The Palau National Capital area was shot on many occasions from the start of excavation in 2000 to its completion in 2005.  As such the CRRF collection represents the only set of such aerial photos for this, and many other projects, as no other aircraft were flying in Palau at the time. Similarly the new KB Bridge, which was started in 2000 and completed in 2003, was similarly documented. These, along with the many other smaller projects that were photographed, produce a unique collection, which documents aspects of the history of Palau that would not otherwise be available to see by future generations.

“Then and Now” photographs

The historical aerial photos taken for military purposes during and just after WWII provide a wonderful comparison with the same areas today.  We have attempted to reproduce 1940’s aerial photos in the present day, trying to get the same angle, altitude and lighting as present in the original to show how things have changed and how they have remained the same.

Earlier efforts included photographs of Enewetak Atoll and other atolls in the Marshall Islands.  In Chuuk State, FSM, all the islands were photographed, many of them as vertical aerial coverage to produce mosaic images.  Many of the atolls between Chuuk and Yap were shot during a ferry flight in 1995 to bring the COZY to Palau, via Yap, and these are among the most remote and seldom photographed islands and reefs in Micronesia.  Given that more than 20 years has elapsed, these photo collections can now be considered “historic”. High resolution satellite images were not generally available of these areas in the 1990s, so the CRRF photos provide some coverage to these poorly known islands and reefs. Such “historical” images are particularly useful for looking at climate change issues, as islands and reefs may well have changed in twenty years.  Quality aerial photos have the ability to provide direct overlay comparison with either contemporary satellite or aerial images, making quantitative comparisons easy to prepare with GIS software.

The photos taken by CRRF used film cameras between 1983 and 2004. Most of these have been scanned to produce digital files, first at 2000 dpi resolution from the image (3000 by 2000 pixel file) and later at 4000 dpi, for a roughly 4,000 by 6,000 pixel final product. The third and final group of photos in the collection are digital photos taken with 35 mm equivalent SLR cameras, first with lower resolution, and since 2008, high resolution (12 Megapixel) cameras. The CRRF collection numbers about 200,000 digital photos with more being added all the time.

Most general use vertical aerials of land and reef are flown at 7,500 feet to produce an image with 0.5 m pixel size.  Using the aircraft the entire land area of Babeldaob can be photographed in only a few hours.  We have attempted to photograph the entirety of Babeldaob once a year since 2000 and have been largely successful. Most of the reefs, such as the perimeter barrier reefs are photographed on a similar schedule, but this is much easier to accomplish since they often have no clouds overhead blocking the view downward. More distant areas that are subject to changes in water clarity, such as Velasco Reef and the northern reef lagoon area, are often photographed, although conditions such as water depth often limit the utility of such images.

In addition to Pat’s extensive collection of aerial photos from the COZY, CRRF also has historic aerial photos scanned from 10 by 10 inch color or black and white prints. Such commercial type aerial photos are typically shot from high altitude, again due to the altitude/area coverage relationship, and have limited resolution. Included in this collection are a number of 1940’s aerial images taken during and shortly after the war. Also for areas of Micronesia, and particularly Palau, there are photos taken during the Trust Territory of the Pacific Island period. Palau also has a large set of “cadastral” prints, used in land surveying, that include shoreline areas along with land areas.

Email Pat about his aerial images