CRRF uses a variety of new underwater technology tools to assist with our work.  Mixed gas breathers allow for deep depths and longer bottom times, not to mention the lack of bubbles that typically scare fish.  Photography and video are important, both for documenting species and environments.  We also assist with a wide variety of autonomous underwater vehicles used to gather data autonomously.  And of course submersibles are everyone’s dream.  We have been extremely lucky to have used several in the deep and unknown waters of Palau.  All of these tools provide unique bits of information to further our understanding of the oceans around Palau.

Closed-circuit rebreathers have been an important tool in our work. Pat Colin was inspired to build his own after the success of the Electrolung designed by Walter Starck II in the late 1960s. Pat used his first full electronic rebreather in 1979, and later developed a follow on unit, called the Science Lung II, which was used for many deep collection dives in Palau to as much as 150 m depth.  Steve Lindfield has been a part of the first generation of scientific divers to use the reliable commercially available mixed gas rebreathers in coral reef research, having done cutting edge studies of the benefits of using such silent-no bubble diving gear in coral reef fish research.  As they are now a proven technology in deep diving research (~150 m depth), studies of diver disturbance of marine life are an important issue.

Light cameras and other imaging system are important tools in CRRFs research.  Standard SLR cameras for still or video images, usually with electronic strobes, are used for wide angle (eg. habitat shots) to macro (eg. species portraits) work. In 2003 CRRF switched from film to digital cameras, with a massive increase in the ability to record data. Pat made a series of PVC underwater camera and strobe housings –  great for use in remote areas that could be repaired with PVC glue!  This basic housing was designed for use to 120 m depths, and if need be, made a pretty good hammer for knocking some recalcitrant stony sponge loose for collection.  For the NCI collection program, we photographed every species sampled, ideally in situ underwater, to provide a visual record of what the sample looked like and aid in species identification, resulting in over 100,000 film and digital photos from the program.

When using the Deepworker 2000 submersibles for NCI collections in 2000 & 2008 we were faced with a general lack of affordable, reliable external cameras with strobe that could survive to depths of ~600 m. Pat ended up making his own housings for digital SLR cameras. The housing were machined from aluminum with a remotely mounted strobe. A lead from inside the submersible was used to trigger the cameras and a laser pointer provided an aiming capability. The camera was rigidly mounted to the sub and the entire vehicle was maneuvered to line up the camera pointer with the subject. In the early years of digital, subs usually had an external video camera with fairly low resolution mounted on a pan and tilt system that was used for general recording of activities, but was not adequate for the detailed specimen photos.

The age of Go Pros

Go Pro cameras were a dream come true for underwater science. A simple still camera system for underwater time-lapse photography opened up infinite possibilities for documenting research. Working with our colleagues from Scripps Institution of Oceanography we put together time lapse GoPro systems that could take a photograph every minute for up to 11 days using a very large memory card and external battery pack. These have since been used to document fish spawning aggregations, mantas, dugongs and jellyfish, among a myriad of other uses.

Steve Lindfield is an expert in the use of 3D underwater video systems for measurement of fish sizes on diving transects, as well as recording market catch data using similar above water systems. Steve has also been a leader in using BRUVs (Baited Remote Underwater Video) in looking at populations of sharks and other large reef fishes, often in deep water below normal diving depths.  BRUVs are a system that  is dropped to the bottom and left unattended for a sample duration, thus avoiding influence from diver’s presence on the fishes attracted. 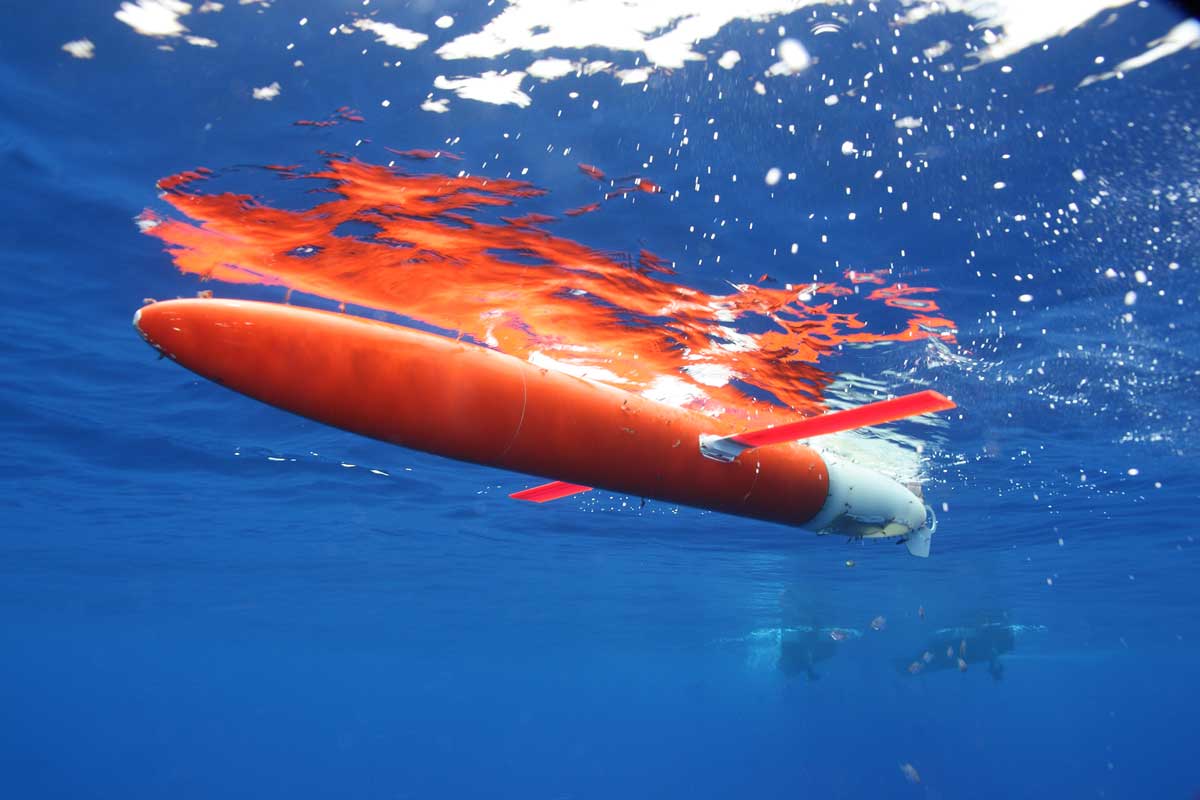 In collaboration with our colleagues from Scripps Institution of Oceanography and the University of Delaware, we have facilitated the use of many state of the art autonomous underwater vehicles (AUV’s) in Palau. The Spray gliders are a remarkable tool for studying ocean currents and have been used with great success in Palau’s ocean waters since 2009.  They gather current speed & direction, and physical information, such as temperature and salinity, from the surface to 1,000 m depth.  Gliders use buoyancy to make them go up and down, with wings and fins to control their track through the water.  They can relay this information to a shore base after making dives to several hundred meters, and stay at sea for several months.  Gliders are largely autonomous except for communicating via satellite links with controllers on shore stations.

In contrast, the REMUS 100 (Remote Environmental Monitoring UnitS) is a propeller-driven powered AUV that can work down to 100 m depth.  It uses acoustic navigation to independently survey and can carry multiple sensor packages, such as side scan sonar, conductivity, temperature and light sensors and a series of Go Pro cameras to view up to 360o. REMUS’s have been used in Palau to discover new types of deep mesophotic reefs within the Palau lagoon, image fish in spawning aggregations and jellyfish in Jellyfish Lake.

Other AUV’s briefly used in Palau have been the Slocum glider, Liquid Robotics wave glider and an autonomous kayak as a platform for instruments.

In 2001 CRRF chartered a one-person Deepworker 2000 submersible from Nuytco Research and brought it to Palau to make deep water NCI collections between 90 and 360 m depth.  Four CRRF staff (Pat Colin, Lori Colin, Mike Dawson and Laura Martin) trained as Deepworker pilots, making a total of 44 dives over 6 weeks collecting over 300 samples.  The Deepworker 2000 is a remarkable scientific tool that has not been fully utilized for this purpose.  It is nimble and a good collection platform with a suitable manipulator and catch basket, and feels as close to scuba diving as any of us would likely get below 90 m.
CRRF has also used a few “subs of opportunity” that have passed through Palau.  These include the Deep Rover and Triton subs on board the M/V Alucia and the remarkable 10 passenger sub carried on board the M/V Octopus.