Mesophotic reef are those which start at depths of about 30-40 m and reach to as much as 150 m depth in clear tropical waters. These reefs and secrets they hold have been a focus of research by CRRF for decades.

The deeper we go, the less we know

Due mostly to limitations of widely used research methods, the global scientific understanding of coral reef ecology is heavily biased towards shallow reef areas. However, light dependent corals and diverse reefs exist below the typical research diving depths. Not only do they harbor species that poorly known or completely new to science, they also provide additional habitat for widely distributed species such as reef fish that may find refuge on deep reefs from impacts such as fishing and habitat degradation.

CRRF has been a pioneer in deep reef ‘mesophotic’ research. Pat Colin has been studying deep reefs since the 1970s, for example quantitative surveys of reef fish were made to depths of 180 in Enewetak Atoll using a research submersible. Then through the development of the ‘Science Lung’ rebreather, Pat has been exploring deep reefs with mixed-gas diving and more recently using ‘Deepworker 2000’ personal submersibles in Palau (see technology page for details on rebreathers and subs). In Palau, explorations of deep reefs were firstly to document the biota and collect for the U.S National Cancer Institute natural product-screening program (1994-2014). More recently we have had an increased focus on understanding the physical processes that affect the formation and functioning of mesophotic reefs.

A review of mesophotic reefs was published by the UNEP in 2016, including a case study on Palau, and Pat Colin and Steve Lindfield more recently published a chapter on Palau in the Springer volume, Mesophotic Coral Ecosystems (2019).

What is shaping these environments?

Most reef corals are light dependent, and while there is ample light at shallower depths for efficient growth and calcification, light decreases with depth until it becomes one factor limiting reef growth.  Temperature also decreases with greater depth, although usually in a step-wise manner, with distinct thermoclines where it decreases measurably over only a short increase in depth, and then remains relatively constant for some distance below.

The figure below shows large variation in water temperature over short time periods (hours to days) due to internal waves impacting the outer slope of Palau. Also temperature stratification is associated with ENSO cycles with more stratified and cooler waters during El Niño and more uniform and warmer temperatures During La Niña. In other locations, typically in higher latitudes such as Hawaii, mesophotic reefs are regarded as thermally more stable compared to the surface waters. In the equatorial waters such as Palau, the rapid short-term changes (several degrees Celsius in an hour or less) and changes over ENSO cycles produces a thermally challenging environment, which is probably a major factor limiting the lower depth of MCEs. 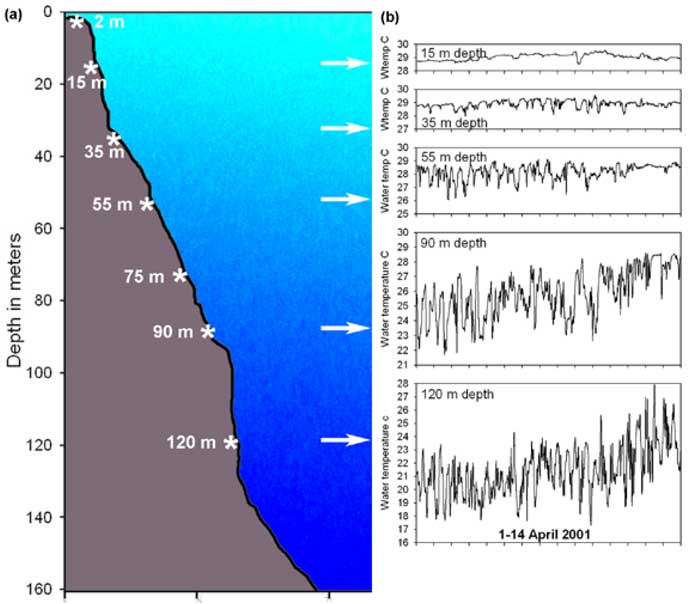 Mesophotic reefs are not visible in aerial or satellite images, so their presence is often unknown. Modern multibeam sonar now allows mapping of these reefs, something difficult to impossible to accomplish with conventional sonar.

With an increased understanding of the diversity of biota, the physical processes impacting the reefs, and habitat mapping, we are now able to apply this knowledge to better understand the ecology of these reef systems in Palau. Mesophotic reefs are often regarded as potential ‘refuge areas’ or even ‘lifeboats’ for coral reefs. However the potential largely depends on the geographic location and the different species of interest. Prior to the most recent global coral bleaching event that started in 2015, and looked set to impact Palau in mid 2016, we started baseline surveys on coral cover and complexity on the mesophotic reefs of Palau. Through mixed gas rebreather diving and use of stereo-video systems, we ran quantitative coral transects at depths consistent with our thermograph arrays (57 m, 35 m 15 m, 6 m) at several sites on the outer barrier reefs. Fortunately the water temperature cooled, as did the risk of bleaching and these surveys were put on hold (due to a lack of funding). In the future we will to expand these surveys.

Quantifying reef fish abundance and size along a depth gradient is another research focus. With fishing pressure mostly focusing on the shallowest reefs, primarily through night time spearfishing, there is the potential for many of these fish species to seek refuge on the deeper reefs of Palau. These deep reefs may also provide areas of refuge from impacts, such as typhoons that devastated the shallow reefs on the east coast of Palau in 2012. Previous research by Steve Lindfield showed that the biomass of fishery-targeted species increases in mesophotic depths and was much higher than shallow MPAs in Guam, which supports the idea of mesophotic reefs as refuge areas for coral reef fish.